Share All sharing options for: Twins Turned Game Around on Kila Defensive Decision 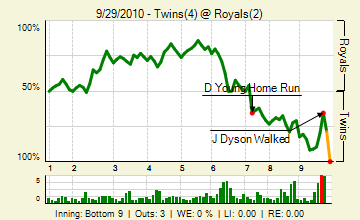 The Minnesota Twins found themselves behind early in tonight's game when the Royals put up two runs in the second inning. Both teams had several chances to add some runs as the Royals starter Luke Hochevar stranded 6 runners and the Twins starter Scott Baker stranded 7 through the first 5 innings.

In the sixth inning, Jason Kubel started off the inning with a strikeout, but then the Twins got rolling. They were able to load the bases with singles by Michael Cuddyer and Danny Valencia and a walk by Jason Repko.   Drew Butera singled driving in the Twins first run.  With the bases still loaded, Alexi Casilla decently hit a grounder to first baseman Kila Ka'aihue. Kila fielded the ball nicely, but then threw the ball off target to shortstop, Yuniesky Betancourt. Betancourt was able to make the out at second, but he was not able to get the ball back to Ka'aihue in time for the double play where Casilla beat the throw to first by a couple of steps. Valencia was able to score from third on the play and tie the game.

Going for the double play was not the correct action by Ka'aihue in that situation. With the Royals clinging to a one run lead, he needed to prevent the run from scoring. The batter, Casilla, had decent speed and the Royals had a probably around a 50-50 chance of getting both outs. The chances went close to zero when Kila messed up the throw to second base. He should have taken the safer bet and try to get the out at home thereby preventing the run from scoring.

The Royals would not see the lead again as Delmon Young homered in the 7th inning to give the Twins the lead.  The Twins added an insurance run in the ninth inning.

There is no way of telling exactly would happen differently later in the game if Kila Ka'aihue decided to get the out at home instead of going for the double play, but least at that point the Royals would still be clinging onto their one run lead. With runs coming at a premium during the previous five innings of the game so far, the Royals had to take the sure out at home instead of taking a chance of possibly turning the double play.