Billy Butler signed a contract extension with the Royals on Saturday for four years with a club option for a fifth year.  According to Bob Dutton, this is how the contract breaks out: 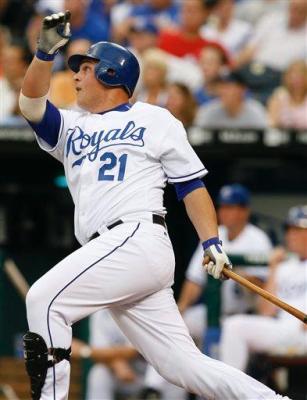 That is $30 million guaranteed over four years.  With the option exercised, it would be $41.5 million over five years.  At first glance, this looks like a good deal for the Royals.  But is it?  And if so, how good is it?

The methodology for determining the dollar value of a player's production is fairly simple and has been used on this site and elsewhere many times.  Each year the average market value of WAR is determined by how much free agents that year were paid.  For 2010 it was around $4 million.  Current estimates of the 2011 value of WAR are about $4.5-5 million.  Therefore, in 2011, a 3 WAR player would be worth around $13.5-15 million.  To be conservative, I'm going to start with a 2011 value of WAR at $4.5 million.

But the value of WAR is not static from year to year.  We are in a period of regular salary inflation, which is expected to continue, especially with the economy improving.  The common estimate for MLB salary inflation is 10%, so I will go with that.

Players in their arbitration years are not paid full market value.  The rule of thumb is that in a player's first arbitration year, he gets 40% of his market value, 60% in his second and 80% in his third.  So I applied these discounts to Billy Butler's 2011, 2012 and 2013 seasons.

So how good is Billy Butler going to be over the course of this contract?  Well, at age 23, he totalled 2.6 fWAR and at age 24, he racked up 3.4 fWAR.  We really don't know how well he'll perform going forward.  Given his age, he could continue to improve.  His power could improve considerably, or not.  Given his poor defense, a move to DH shouldn't hurt his value much, but it could a little.  And then there's always the possibility of injury.  So below, I've calculated Billy Butler's value based on if he's a 2.5, 3.0, 3.5 or 4.0 WAR player.

The final calculation that must be made is a discount in the contract total.  When a player gets a long-term guaranteed contract, he's getting safety, security and surety, while the team is buying risk.  Therefore any long-term contract is going to give the player something less than his full value.  As is commonly used, I'm going to discount the player's total value by 15% to compare it to the contract.

While the guaranteed years on the contract are great for the Royals, the team option really puts it over the top.  A $12.5 million option in 2015 is just crazy.  Billy Butler is very conservatively worth $13M per year on the free agent market right now.  In 2015 even with no improvement with salary inflation he'll be worth upwards of $20 million, and quite possibly more.  So the Royals have a pretty cheap option for 2015 with no risk.

And of course a good value long-term contract gives a player very good trade value.  Many teams would love to take on this contract either now or in future years.  A future trade of Butler at $8 million per year with a $12.5 millon club option would be very easy and would garner a great return.

But that's only a possibility.  Maybe the Royals will just keep him as part of a good young team.  And that would be easy to do because this contract really is ridiculously good for the Royals both now and very likely in the future.