Billy Butler: More Than You Probably Ever Wanted to Know

Share All sharing options for: Billy Butler: More Than You Probably Ever Wanted to Know

Billy Butler was the best hitter for the last few years on the Royals and here is an in depth look at him with way too much graphs, charts and heat maps.  Billy is easily one of the 10 best 1B in the league and unlike most of the other first baseman that get most of their value from hitting home runs, Billy's main value is from getting on base.  The following article is a step by step look at his stats and then a ton of graphics on his hitting tendencies.

First, here is a look at his basic stats (all the following data is from Fangraphs.com):

The following is the type of balls that Billy has hit over the years:

Billy's values generally hover around the same values of 18% for line drives, 47% for ground balls and 34% for fly balls.  The home run drop off in 2010 can easily be explain by the HR/FB decrease by about 3.5%.  Kauffman stadium is one of the hardest parks to hit a home run at, so unless Billy really begins to hit more flyballs, he will continue to have home run totals in the high teens or low twenties.

Warning, tons of graphics coming, so if you are on a slow connection, it may take a while to load them all

Next, here is detailed numbers on his plate discipline:

Some numbers jump out for 2010.  He did swing less when compared to any year previously (42.7%), but pitchers threw less pitches in the strike zone (45.2%).   On the pitches he did swing at, he tied his career best contact  percentage.  Billy in 2010 took what the pitchers gave him, not much, and therefore took a few more walks.  This could easily be attributed to there being no other decent hitter on the team to protect him.

The final bit of stats is the pitch types runs values (When the pitch type trails with "/C" it denotes per 100 pitches. wFB/C would be fastball runs above average per 100 fastballs.):

Besides the values from 2008, which are almost exact opposites of the other 3 years, he loves to hit curves and fastballs, is rather average with cutters and change ups and struggles with sliders and split finger fastballs.

With the number back ground, here is visually how Billy hits.  First, I will look at the strike zone Billy uses.  The following graphics are the pitches swung at (foul, hit or swing and miss) divided by all pitches collected from MLB's pitch FX data base.  The view is from the catcher's perspective.  The box is the rule book strike zone and the circle is used just for reference. 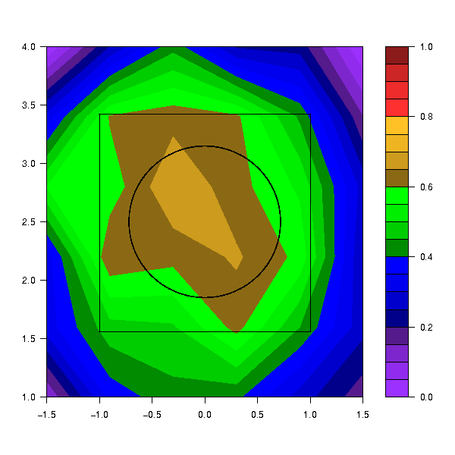 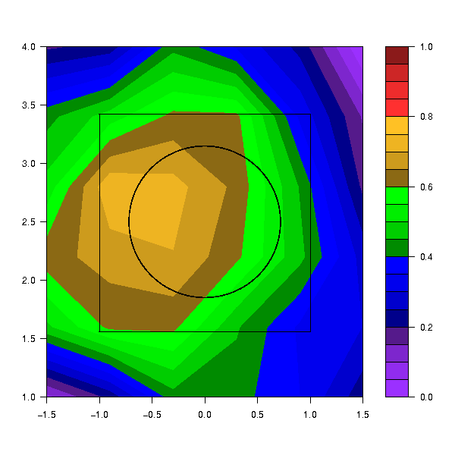 Generally, Billy has pretty good understanding of the strike zone, except he chases pitches high and inside from RHP.  Now I will go through his strike for various counts. 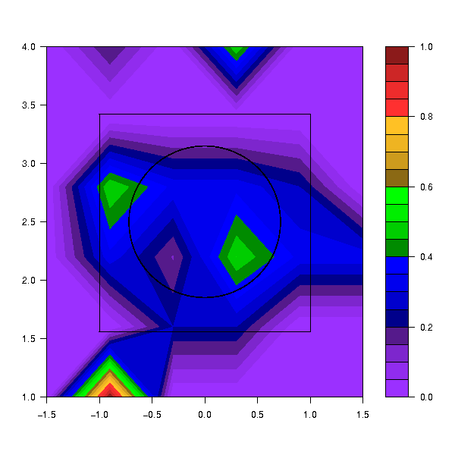 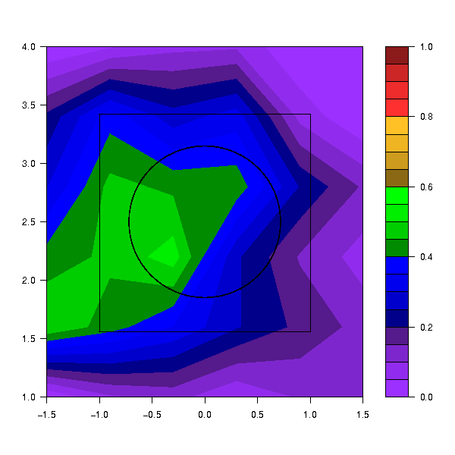 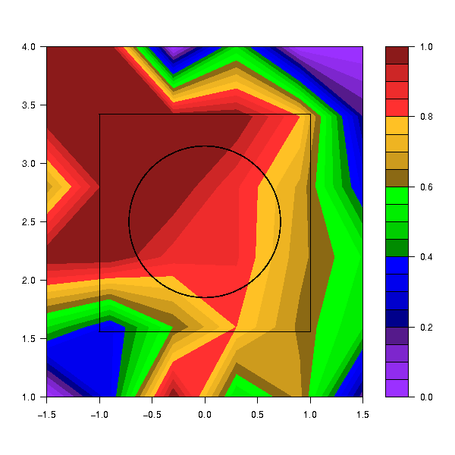 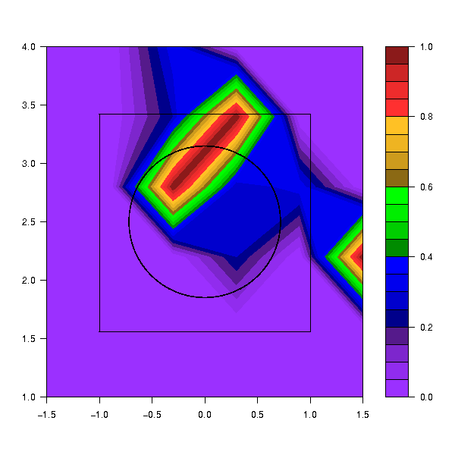 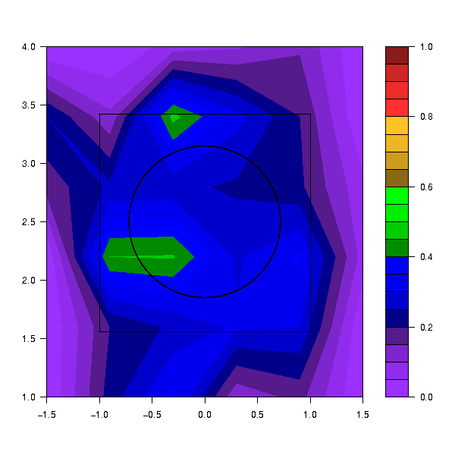 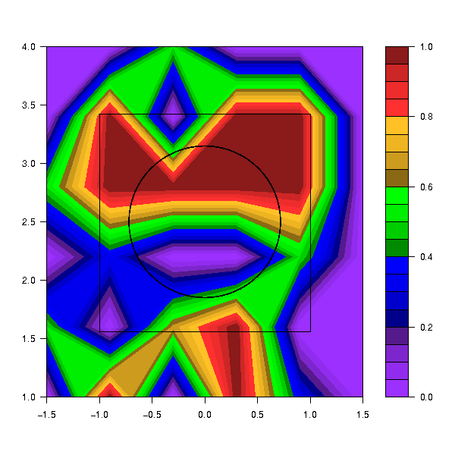 Some notes on the various counts.  Billy is pretty selective on the first pitch, looking at only swing at pitches low and inside vs. RHP and either high or low and inside vs. LHP.  With the count in his favor (3-0) he is swing at pitches inside or across the middle vs RHP and just high vs LHP.   If the count gets to 0-2, he breaks out his Yuni impersonation and begins hacking at everything in sight.

Now that we know the location of the pitches that Billy swings at, the following is the average run values for pitch locations.  The data is not as smooth as the zone data, but it gives some general idea of where Billy hits pitches better at.

vs RHPs, all years, all counts: 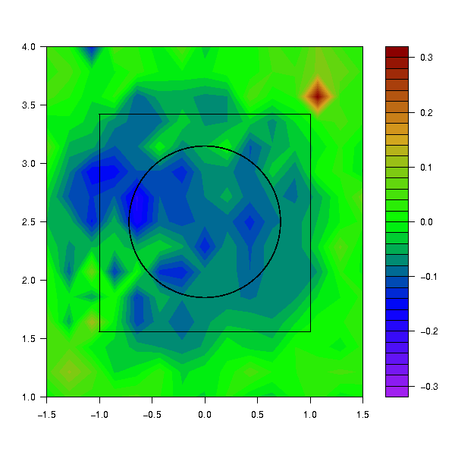 vs LHPs, all years, all counts: 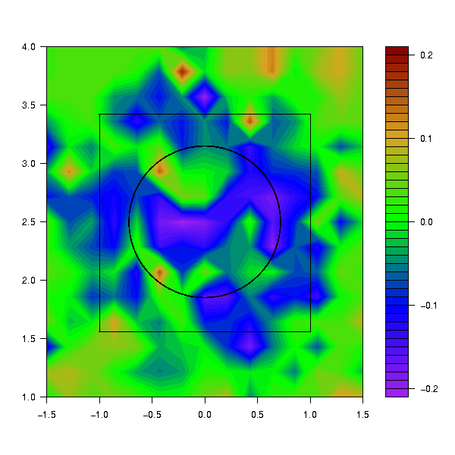 In both cases, Billy's value is coming from pitches low and inside and high and down the middle.  They also show his plate discipline, because there is positive values near the plate (called balls).  The one concern is his inability generate positive value from pitches in the middle of the plate and inside and down the middle.  Looking at is tendency to swing at these pitches, a pitcher with control would have decent results pounding this zone.  It can be seen in the purple area here in this less detailed image from both LH and RH pitchers: 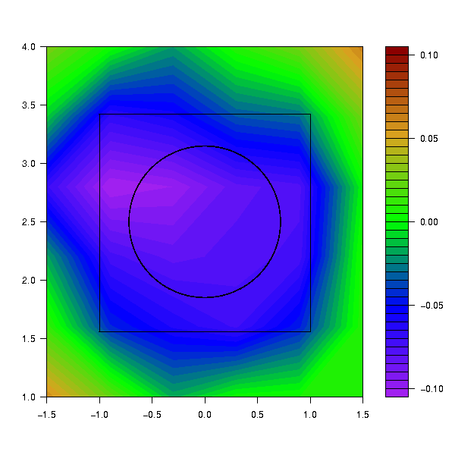 Finally, here is a look at where Billy hits the ball, especially line drives and fly balls (include home runs) that make it to the outfield.  I like to look at these 2 only because changes in a player's power can be view.  The graphs show the distance the ball was hit and the angle the ball is hit (pull hitters vs. a hitter that hits to all parts of the park).  The data was collected from MLB's Gameday data. A negative angle is a ball hit to left field and positive angle is one hit to right field.  Besides plotting each ball hit, I create a LOESS regression curve that averages recent values together to create a general trend.  This is helpful in finding changes in erratic data. 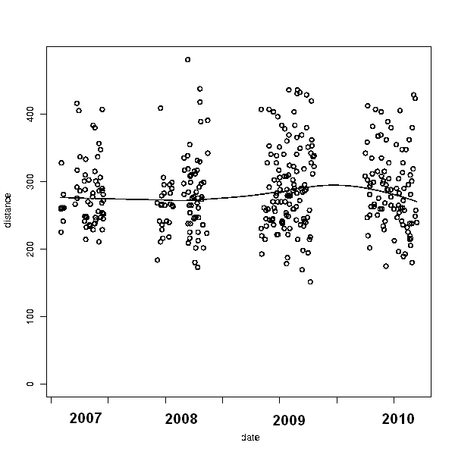 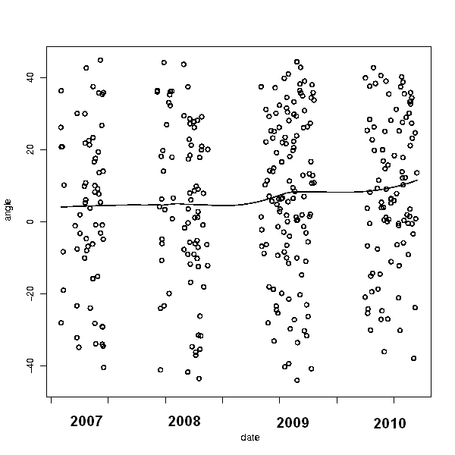 Generally, Billy maintains a constant distance and angle for all outfield hits.  There was an exception in the past 2 years when he had a bump in the distance hit and he is pulling the ball even less.  Here are the charts for just 2009 and 2010: 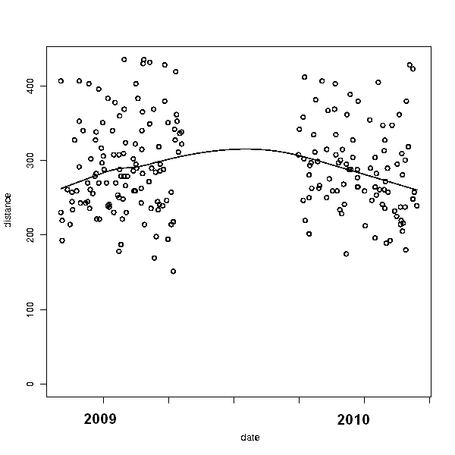 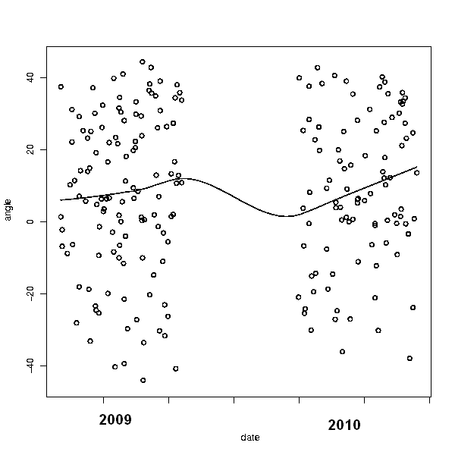 As seen from the previous two graphs, Billy distance per ball hit peaked at the end of the 2009 and then decreased throughout the 2010 season.  His loss of home runs per fly ball could be caused by this loss of distance hit per ball.

Hope you enjoy the journey that is Billy Butler.  Let me know if you have any questions and I will try to do a few more of these before the season starts (next up is Alex Gordon).