Slider: Used around 25% of the time until 2011, when he began to use it 40% of the time. The White Sox noticed it was his most effective pitch and got him throwing it more.

Here is is usage patter over the last few years: 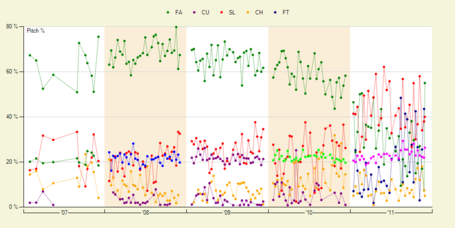 He looks to have a K/9 in the upper 6's with a BB/9 round 3.0.  He keeps the ball in the ball park at a league average rate. His talent looks to be be a bit better than any other starter on the Royals except possibly Paulino.

His injury history is close to perfect.  One big red flag I have is his increase use of the slider. There is some work done that high slider usage leads to an increase injury risk.

He would be an improvement over the current Royals starting pitchers.  He would eat up a ton of innings and gives consistent production over the years. His price, IMO, is probably a little too high for the Royals to afford.  I would probably max out a $36M/3 contract for him. With the lack of SP in the FA market, I think he will go for much more.