Jeff's post last week suggested Eric Hosmer plays too close to the line by identifying which zones he made the most outs. Thanks to the data from MGL, I identified 44 plays on groundballs in which Hosmer did not record an out, but other MLB first baseman recorded an out over 50% of the time. 15 of those times, the Royals second baseman made the out. These plays did not hurt Hosmer's UZR rating, since an out was recorded. 29 of the 44 plays went as hits and hurt his defensive rating, and those plays are in the table below.

MGL's data lists much more information, but this is everything I found pertinent while trying to find an explanation for why Hosmer did not make the play. The time given is where you can find the play on the mlb.tv archives. I prefer to show everyone the video, but that would break copyright laws and the MLB is strict on its video policies. If you have mlb.tv, I encourage you to look at the archives to see the plays yourself. For everyone else, the screen shots after the jump will hopefully suffice.

As the data shows, Hosmer had his defensive struggles in different situations. 1/3 of the time he was holding the runner on when he did not field a ball that over 50% of the time other first baseman field. This is harder to blame solely on poor positioning, since all first baseman are closer to the bag in this situation. 15 of the hits were against slow hitters while 14 happened against fast hitters, showing the speed of the hitter did not factor into his struggles. The majority of the balls hit towards Hosmer MGL classified as hit with medium velocity, and UZR accounts for how the ball is hit when determining how often an out is recorded.

Last season, Hosmer only recorded nine outs that less than 50% of first baseman recorded an out on. Four of those plays came against bunts, highlighting Hosmer's athleticism, but that means he only recorded five groundball outs others did not. This large difference in outs missed versus additional outs gained is hurting his UZR. After watching the plays a hit was charged against Eric, I reached two conclusions and one hypothesis.

Today, I am going to address the most glaring and significant issue, playing close too close to the line. Early next week I will talk about the other two issues in a separate post; one proved to be too long and contain too many screen shots.

Playing too Close to the Line

This first conclusion is the one I feel most strongly about and has the most video evidence. Hosmer plays too close to the line, and I think it is a team-shift instead of a personal decision. On August 3rd, the Royals gave up a groundball to Matt Wieters that the data claims over 50% of first baseman record an out. 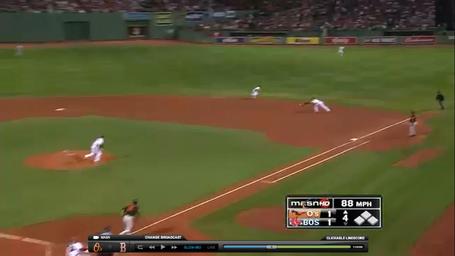 Gonzalez took one step to reach a groundball that Hosmer would have no chance of reaching in his position. Gonzalez is also able to reach the groundball Wieters hit against the Royals, since he appears to be around five feet farther away from the line. I also don't think Hosmer is choosing to play this close to the line. Look at this groundball against Mark Texeira. 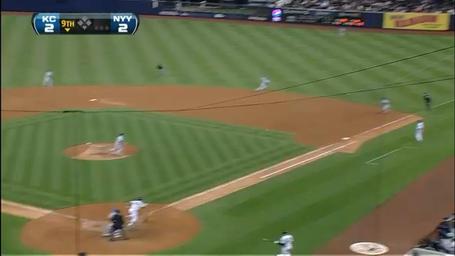 Hosmer is deep and close to the line, Chris Getz is closer to first base than normal second basemen and Alcides Escobar is basically in double-play depth for the leadoff hitter in the inning. One could argue this is a Royals shift against left-handed power hitters, but the fact that Hosmer's missed ground outs are an equal distribution between fast and slow hitters (not a perfect way to judge power, but still suggestive) makes me believe the Royals play almost all left-handed hitters to pull the ball. 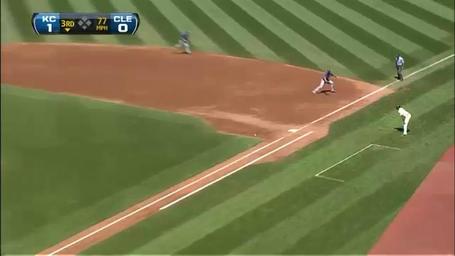 The above ground ball came against Michael Brantley, who owns a career .359 SLG and .094 ISO. Still, Hosmer is practically hugging the line and Johnny Giavotella is playing very far away from second. Hosmer is able to field this particular ball (but an out is not recorded...more on that next post), but their positioning is not normal positioning against a LHH.

Overall, I posted times for 14 of the 29 hits allowed against Hosmer that most first baseman record an out. In 10 of those 14 plays, positioning was the only problem I noticed that prevented Hosmer from recording an out. Since it appears the Royals are the one's positioning Hosmer and the rest of the defense, I think they are hurting themselves. Remember, Hosmer only reached five grounders that other first baseman reach and allowed 29 ground ball hits other do not. For context, each single with no runners on and zero outs is roughly worth .39 in run expectancy, meaning if all the hits were singles with no runners on (they weren't, but its a thought experiment), the run expectancy increased by 11.31. For this to even out in run expectancy, all of Hosmer's five defensive saving plays thanks to his positioning would have needed to come against a triples with the bases loaded and one out, which has a run expectancy of 2.23. The singles the Royals allowed last season by playing all or most lefties to pull ground balls is outweighing the benefits of not allowing extra-base hits and is hurting Eric Hosmer's defensive rating.