Share All sharing options for: Catching Up With the 1994 Royals: Part 11 - David Cone

I don't want to get political but there is an issue that needs to be addressed to Royals Nation as a whole. Certain factions seem to think that I am trying to damage the spokes of the nostalgia bandwagon for the 2003 Royals. They say I hate that team and my judgment is clouded because I am mad at Michael Tucker. These accusations are ludicrous and completely erroneous. I have no qualms with the "Nosotros Podemos" ethos.

Firstly, the 2003 team is my fourth, possibly my third, favorite Royals team of that decade. Secondly, the only aim of this journey is to reinvigorate sentimentality for a squad that managed in a mere 115 games, to attain some of the most pristine levels of tragedy in the history of our beloved franchise of thrones. Hopefully this will be a turning point and the series can continue, unaccompanied by the tarnished horns of rumor blaring in our ears. With that out of the way I would like to draw your attention to Royals Legend David Cone. 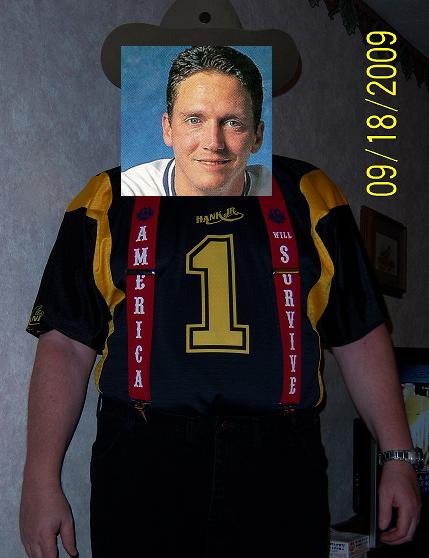 I made preparations to interview David Cone seven months ago. When the appointment was confirmed I went to Burlington Coat Factory and used my half of a groupon to purchase a silk shirt. It was a little snug. Unfortunately fashion became a moot point because Cone cancelled on me. Royals Legend Rico Rossy learned via Cone's myspace that he had had an emergency plague scrape at a local dentist. We rescheduled for the next week. Cone cancelled again this time through a facebook message. He said that his TV had gotten real blotchy but he would love to get together soon. I am quick to forgive a Royals Legend so we made new plans. On the day of our meeting I got a text message from Cone. He said he could not come because he had a bruise on his foot. Rico did some research and found that David Cone had won a sand volleyball tournament in Belton on the same day.

I got the point, a WAR of 6.1 does not a public relations guru make. But the more I thought about it and the more I talked about it with Rico and Debra the more it became clear that the integrity of this investigation would be seriously compromised if I did not mention 1994 Cy Young Winner David Cone. So I put together an ad on craigslist and got a few fun facts about David Cone from some Saber-Samaritans. Here are a few David Cone Fun Facts:

1)      David Cone had been living off the grid since 9/11. Eats blueberries and kiwis every day.

2)      The next license plate David Cone owns will be his first.

3)      The next toothbrush David Cone owns will be his first

6)      David Cone tried to start a Russian baseball league based upon the barnstorming principles of the Federal League. The Russian Baseball Federation faltered due to the greed of the owner of the Moscow Khuligans"Hooligans", the untimely slandering of Cone in the press by a centerfielder named Ivanovich, (He called Cone "byelorutchki" or white hands.) and the frigid conditions.