Share All sharing options for: Jonathan Broxton to the Royals (Pending Physical)

Jonathan Broxton has been signed by the Royals according to Ken Rosenthal. The bullpen seemed set for 2012, so the move seems a little weird by itself. It may just an initial trade that puts some of the 2011 bullpen pieces on the move. Depending on terms, it doesn't seem horrible on the surface.

Here is a few stats on Broxton:

He did not pitch well in 2011.  His velocity got worse as the season went on. 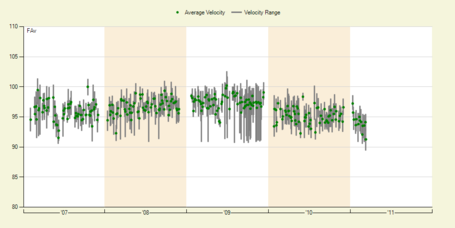 He eventually went on the DL for a sore right elbow. I will have to wait and see how this signing affects the team.