Contract: One year left of team control with probably $7M due.

Fastball: Sinking in motion.  Averages around 90MPH and used 60% of the time.

On all his pitches, he is not able to maintain much velocity on them over the course of a game.  Here is a plot of the first game of the 2011 season that Jonathan pitched (other games are worse than this one): 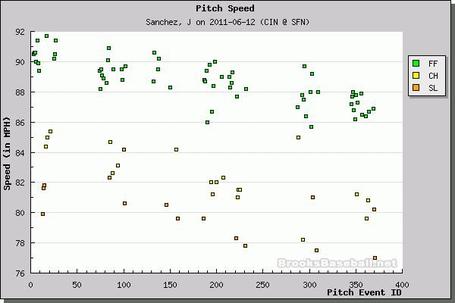 All of the pitches drop in speed anywhere from 4-6 MPH.

Now here is Hochevar's numbers looked at the end of the season: 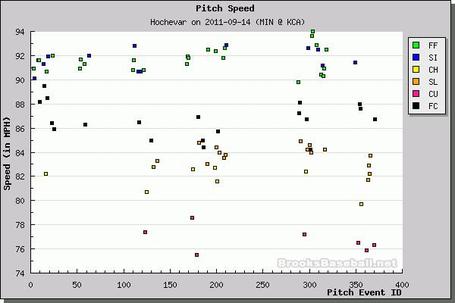 Luke's pitches stay in the same range over the course of the entire game.  Jonathan's declining speed will cause him to struggle later in games.

Jonathan's strikeout total is impressive. The total will probably get worse by pitching now in the American League.  I will not get into the talent distribution between the AL and NL, but he won't see the pitcher bat 2 to 3 times a game. He had a 6.5K/BB ratio vs pitchers and only 1.8K/BB  vs. other hitters.  This drop in Ks is seen with AL pitchers having a K/9 about 0.4 less than the NL (BB/9 is the same).  I would expect his K/9 to be around 8.5 next season.

The walk rate is a disaster.  He has shown no signs of getting it under control.  Since he came in the league in 2006, he has the highest BB/9 among all pitchers at 4.8 with over 700 IP.  The next highest total belongs to Doug Davis at 4.5. I would not worry too much about the large jump last season.  Most of the extra walks happened in the 5 games before he went on the DL when he had a 0.84 K/BB.

One other huge issue with being a high K and BB pitcher is that he throws a ton of pitches to get through an inning. On average, doesn't make it through 5.5 innings per start.  In 2010, he made 33 starts.  Roy Halladay was able to throw 250 innings in his 33 starts.  Sanchez couldn't get over 200.  The bullpen better be 4-5 deep on the days he starts.

Generally, these values are close to league average and should not be a cause of any concern.  By changing ball parks, he should see his HR numbers improve. The HR PF in San Francisco were 82 (LHB)  and 99 (RHB).  In Kansas City, the numbers drop to 71 and 85.

The Total line is fairly consistent with all values ranging from 4.08 to 4.26.

He is not the healthiest of pitchers.  He has already missed time for 2 left arm injuries. The injury didn't cause too much of a drop off in his FB speed: 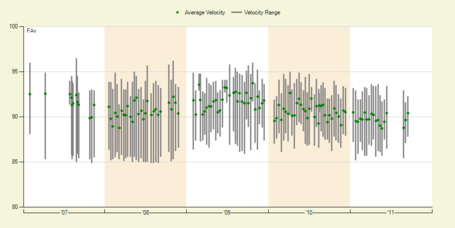 I like the trade on the surface. The Royals got rid of an expendable commodity in Cabrera to fill a need in the starting pitching staff. Sanchez comes over has a high K and BB pitcher. These extra pitches lead to short starts and extra work on the bullpen. Also he has spent a couple of trips on the DL in the past for problems with his throwing arm. He looks to be a nice addition to the team, but he would be a great pick up if he could get the walks down. Dave Eiland, it is time to earn your pay.