When I wrote my article about top prospect success rates, I pointed out that historical success and failure rates do not dictate how various prospects will perform.  A 25% success rate for a certain type of prospect at a certain position does not mean that a specific prospect will likely fail.  Every prospect will land somewhere on a spectrum from failure to stardom.  That being said, I thought it would be interesting to see how the historical success rates apply to the Royals in the new Baseball America top 100 prospect list.  I’d like to know what would be reasonable to expect from this very good group of prospects.  Hopefully these numbers shed some light on that.

Below, I applied the various success and failure rates to each top 100 Royals prospect.  I used the position player and pitcher quintiles to assign the percentages.  If a pitching prospect is ranked 28th, he is assigned the percentages for pitching prospects in the 21-40 quintile.  Since 78.5% of such prospects fail (under 1.50 average WAR) and 21.5% succeed (1.50+ WAR), he becomes .715 busts and .215 successes.  I also included the values for the "Below Average" category (0.50-1.49 WAR) and the "Superior" category (2.50+ WAR).  I think the inclusion of the below average category is useful because that includes bench players and relievers that make a genuine contribution to the team, albeit a limited contribution.  Most relievers, including good setup men, fall into this group.  These four categories are not mutually exclusive, as "Below Average" is a subset of "Busts" and "Superior" is a subset of "Successes". 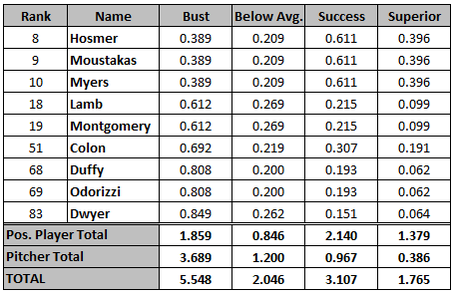 This data can be summarized by showing the total number of prospects who should be expected to fall into each of the following categories:

I have included tables with the totals rounded to one decimal and rounded to whole numbers.

These numbers suggest that Royals fans should have some pretty modest expectations about the ultimate success of this group of prospects.  Out of 9 prospects, the historical data shows that we should expect only 3 to succeed.  There would be about 4 worthless players, 2 contributors, bench players or relievers, 2 average players and 1 star.

I think it is important to note that this top 100 list is a snapshot of the Royals top prospects.  Next year other Royals prospects might be added to the list and some of these might fall off (either do to promotion to the majors or because of poor performance or injury).  But the point is that there are other prospects beyond this group of X who will likely make future lists and have the opportunity to succeed in the majors…or not.  So we can’t say that the Royals current minor league system is likely to produce only 3 successful major leaguers.

But I don’t think we should expect the Royals major league team in the coming years to be comprised of a large number of successful prospects.  Even if the Royals have a better than average prospect success rate and continue to add players to the top 100 list every year, that is still a pretty modest number of successful prospects.  It’s a good start, but if the Royals want to become a playoff team, they are going to need considerably more talent from other sources, including current KC Royals and players outside of the organization.