Located in south-central Missouri, the proud Royals Radio Network Affiliate of Ava certainly brings a back country, hill country feel to the confederacy of sometimes Royals fans found across the network. No staid midwestern berg here. No, in fact, Ava might be the most stereotypically Ozarkian town in the newtork, if not all of Missouri.

To begin, the very name of the town speaks to the tired cliche of hilltopper ignorance. Ava, it seems, was originally known as Militia Springs. (An oddly evocative name, to be sure... part sylvan, part martial, all Civil War Era Missouri.) Supposedly, the new name of Ava was adopted because the residents of the town could not spell Militia Springs correctly. Thus, A-V-A was attractive. Nevertheless, I'd rather have my hometown named in this way than the alternative, seen endlessly between the Mississippi and the Missouri, of "the town was named for ____ G. ____, a railroad executive." Right or wrong, accurate or not, when you change your town's name to make it easier to spell, you're opening yourself up to a joke or two.

Beyond the matter of the town's name, lies the fact that the town became the county seat of Douglas County in typically bizarre fashion. Ava was a compromise seat put in place after a seemingly nonsensical battle between two other towns had waged. You see, the original seat had been Arno. However, as the unnamed contributor to Wikipedia puts it, "during a general period of chaos" after the Civil War, vandals broke into the courthouse at Arno, and took the county records, and whatever else, to Vera Cruz. Lord knows why any one cared, though if you read much local history, you do see quite a bit of this. In any case, if a county's page on the typically anodyne Wikipedia includes the phrase "a general period of chaos" it probably had a, shall we say, colorful history.

The same rural eccentricities and general grotesqueness, in the Winesburg, Ohio vein, come out in the details. We have the curious and scatological detail of the county's supposed nickname of "Booger County," (which is apparently a pan-Southern thing) the various legacies of the Civil War, the sustained population decline through the first half of the twentieth century, the legends and rumors of bootlegging, and all the rest. And now, for our own time, down in Douglas County, the rock-ribbed Republicanism and the daily specials on donuts and pizza at the local Casey's, that ubiquitous feature of the region.

Ava is the home of the Missouri Fox Trotting Horse Breed Association, which makes extensive use of the not-very-much-more-helpful "MFTHBA" on their website. The Missouri Fox Trotter is a breed, and the MFTHBA promotes their well-being, as well as, we can be sure, their continued propagation. The organization maintains a pony registry, publishes a magazine and organizing events, including the annual National Show, which takes place in Ava.

Another popular event is the annual Christmas Parade. Last year's theme was "Candyland." Although this might appear to be a somewhat whimsical choice, the Bethany Baptist Church came through with an inspiried float, and walked away with the $500 dollar prize for best in parade. 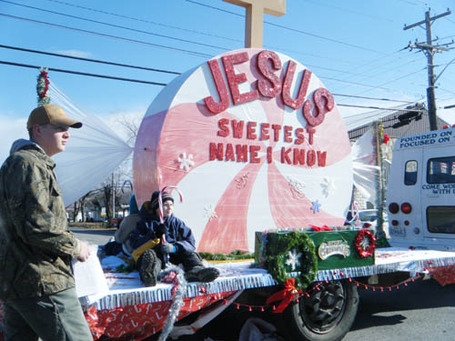 Ava's high school team, the Bears, endured an up and down 6-5 season, that ended with a loss to Springfield Catholic. An official protest was filed with the state board, arguing that there are no Catholics in Springfield, and thus that the school must have been an imported semi-pro team from somewhere in the Rust Belt. The decision is still pending. Meanwhile, the 2008 volleyball squad, which posted a team best 6-1 record, is still talked about around Ava. Rumor is, those girls listened to the Royals constantly while practicing in the gym. No Avan (?) has made the Major Leagues.

The Royals are lucky to have Ava as an affiliate. Southern Missouri is generally Cardinals territory, and I was a little surprised to see that Ava wasn't one of those dreaded dual Cardinals/Royals affiliates (that usually broadcast the Cardinals more regularly). 1430 AM and 92.1 FM combine to bring Royals baseball to listeners from downtown Ava to the woods of the Mark Twain National Forest. Both sides of the dial are run by KKOZ - The Best Radio in the Ozarks. KKOZ also carries Mizzou sports, plays country music, and features a number of local programs.

May the next time you find yourself driving from Seymour to Gainesville, MO on a summer night, you turn the dial to 1430 AM. When you pass through Ava on Highway 5, pull over at the Casey's. I stop somewhere near the donut bin, waiting for you.