Share All sharing options for: Walk Rates and Aging Curves

Recently, I noticed a trend with a few current and ex-Royals. The player will break on to the scene and have a good season, but the player had a low walk rate. The excitement grows around the player and people begin to expect more from the player. Pitchers then begin to figure out that the player will swing at pitches further and further out of the strike zone and their career goes down hill. These player's flashed one year and then seemed to stay around the league because people look back to that one season.

Here is a list of several Royals that fit into that category:

I decided to look to see if these players actually age differently than the average population. Fellow writer and research, Mitchel Lichtman, publish the most comprehensive batting aging study to day (here and here). I asked him if he would use his data and create a new curve with a different set of players and he agreed.

The criteria I sent him was that the player in just one season needed  to have 300 plate appearances, an above average wOBA and  be 25 years old or younger. A little over 300 players met the criteria since 1980. The following is the aging curve for the subset of players and the general hitter population. 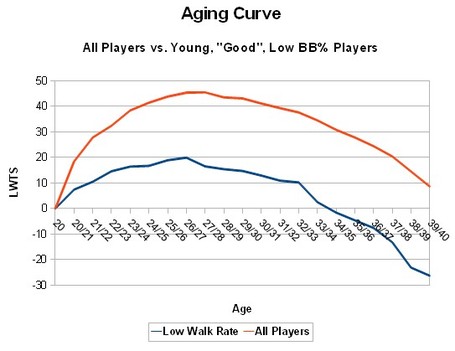 The one key to remember is that this curve looks at how they age, not how good they will hit. Vlad makes the list of players looked at. He was good at having little plate discipline. It is just the players that have that low walk rate, don't peak like other players.

Not exactly the curve I was expecting when I asked for the data, but there is some useful information available. Both curves peak generally at the same age, 27 for the low walk group and 28 for the general population. The big difference is that the low walk group don't improve nearly as much as they age into the peak years. Then when they begin to decline, they drop off at the same rate as the general population.

The key information to take from this data is that players that had low walk rates when they were young will be playing near their career best and they should not be expected to get much better as they age into their prime years.