It all started with billybeingbilly's glorious comment " hmm...im starving....  tonite is definitely a good night to play my over/under game on my taco bell order….the number is $11"

This comment has become somewhat of a Tall Tale, not so different from those of Pecos Bill, Johnny Appleseed or Paul Bunyan, and to celebrate this meme on its cotton anniversary I have challenged myself with the task of taking down $11 worth of cuisine from my local Taco Bell.

So on the day of Tuesday April 12, 2011 I went all day without eating, skipped breakfast and pushed back lunch till 3:30 trying to give myself the best chance of taking down the Herculean attempt of tackling $11 worth of Taco Bell. 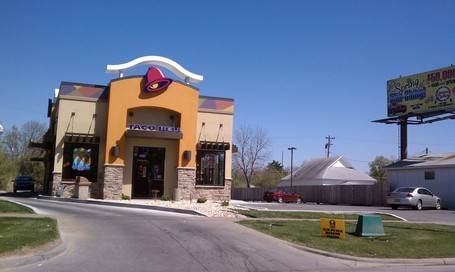 Once I entered this fine Tex Mex establishment I thoroughly analysed the menu and tried to deduce the best way for me to actually be able to consume $11 worth of Taco Bell.  I weighed my options, from ordering 11 soft Tacos to ordering a number 6 which consists of 2 chalupas, a taco and a large drink, but that would only come to $5.79 so I would have to order additional items, I then realized for the best way to increase my bill without actually increasing my order size would be to get something with chicken or steak since those items cost a little more and every penny was precious at this point.  Now Im not a huge fan of Taco Bell Steak so I went with the old tried and true chicken quesadilla, so I ordered the trusty number 7 which consists of A Chicken Quesadilla, a taco and large drink, and to get the order to $11 I also ordered 2 burrito supremes.  I quickly did the math in my head and I knew it was going to be very close to achieving the $11 goal, and EUREKA!!!  The total came to $11.04. 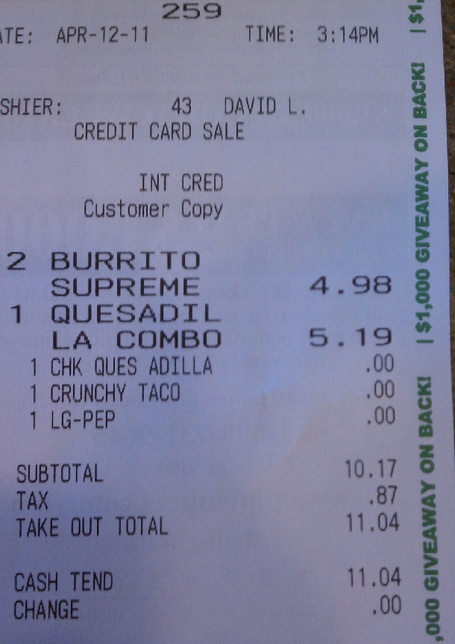 I then paid for the order, asked for it to go and eagerly raced home to see if I could indeed devour this cornucopia of delicious Mexican food. 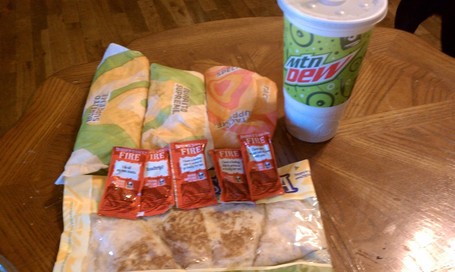 Fifteen minutes in I am starting to slow, and I am really beginning to question why I would subject myself to this but as I finish the second burrito supreme I know that I will in fact be able to finish this meal, but Im not sure if I want to, and begin the second half of my chicken quesadilla.  This actually is harder than I expected because at this point I am quite full, I keep taking sips from my large fountain drink trying to procrastinate, trying to muster up a second wind and I finish the chicken quesadilla and without hesitation I start on the crunchy taco.  At this point I realize that I've made a huge mistake, I should have ate the crunchy taco first or ordered a soft taco because at this point (18 minutes in) the crunchy taco is a soft taco, and for lack of a better word is kind of disgusting and really is almost inedible at this point, but I force myself to eat it anyway...  AND I PREVAIL!!! 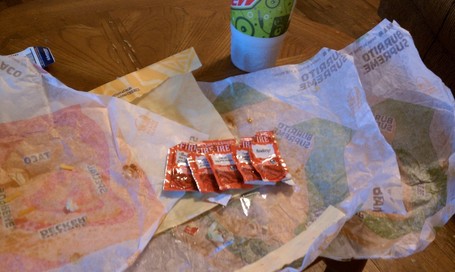 I have tackled the mythical $11 at Taco Bell, but I am not proud in this moment,  I am actually quite ashamed, and sick to my stomach.  Actually as I write this all I can think about is taking a nap, I really do not feel well at all, but like the Taco Bell feast I have to finish writing this post.

Taco Bell has a fantastic little calculator for calculating the "nutritional value" of their foods, and it allows you to combine items to calculate the overall totals... And man Im going to have to go walk the dog, because there is a good chance of my heart stopping in my sleep tonight.  A crunchy taco, chicken quesadilla, 2 burrito supremes and 5 taco bell fire packs contains 1560 calories, 4060 mg of Sodium, and 28 g of fat...  Good Lord I may not live through this, but I hope my telling of this event is as entertaining to everyone else as painful as it has been to me.