Share All sharing options for: With Familiar Stars Absent, Battle for Grass Creek Isn't the Same

GRASS CREEK, WYOMING- Yes. It is still a hard town. A tough and strong-loving one too. Lately, the simplest way to start a fight around these parts is to say the words "Northwest Green." Should a Royals fan hear you, there's only one response, and not one that's positive. Should a Mariners fan hear you, well, it's a little more complicated, but they aren't likely to take your words gently either. Teal means something here. Always has. Chances are, they don't like that name or they don't like your mocking or they don't like both.

But it would be a lie to say that things are the same. The Mariners-Royals rivalry, which was really so much more, cut deep in Hot Springs County, Wyoming. To all points northwest, a passion for the Mariners. To the southeast, diehard Royals fans. Here in Grass Creek, we see the divide. With Seattle 945 miles away and Kansas City three miles further, it has fissured this place for decades.

Things really intensified however around the waning days of the Bush Administration, when Royal General Manager Dayton Moore began acquiring former Mariners at a rapid rate. Could you blame him? He took one look at the powerhouse Bill Bavasi had built and knew, despite the rivalry, that the way to glory was to beat the Mariners by becoming them. Gil Meche switched sides, then Jose Guillen, then Miguel Olivo, then Horacio Ramirez, then Willie Bloomquist, then Yuniesky Betancourt. If you played in the Emerald City and were capable of posting a sub -300 OBP for months at a time, you were on Kansas City's Most Wanted List. 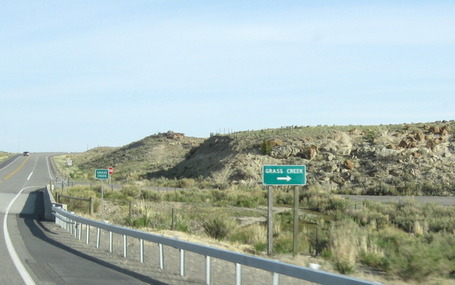 A dispatch from a town divided.

"Maybe it's better now, maybe we need a reprieve" I'm told by Puchy Delgado Wilson on the road from Grass Creek to Thermopolis, the County Seat. Yes, he's named after the former Mariner, who appeared in just 13 games for the '77 Mariners. "My Dad thought he was going to be a star," he says. "It wasn't the easiest name to grow up with anywhere, but it was much worse when I lived in Denver. People here know who the original Puchy was."

The Royals and Mariners resume their rivalry this Thursday and as usual, most near everyone in Grass Creek will be watching. The dominant storyline this year is the double or perhaps triple return of Miguel Olivo. Olivo, in his second stint with the Mariners, was a Royal in 2008-9.

"He's been hated and loved more times around this place than Hulk Hogan," says Jennifer Smith, the President of the town's Mariners Fan Club (motto: "We're closer.") Her thoughts on Gil Meche, however, are less ambivalent. "Meche? Oh, Meche can die. He retires rather than being paid $12 million dollars? To play a game? Do you know how much good a man could do with that money?" Looking into her deep green eyes -- of course -- I can't help but think that her thoughts are not entirely objective on this matter.

Yes, people do sometimes change sides, though it isn't common. Houston Parrington did. Parrington, 87, came to Grass Creek in the 1940s to work for the railroad. Surprisingly, this old rail-splitter has changed tracks. "I was a Bloomquist fan, to speak true. Had a friend tell me he saw Bloomquist drive through town one time. Drove that car the way you'd want your son to: handled the wheel real professional. Two hands on the wheel."

And when Bloomquist became, like so many others, a Royal, Parrington thought, "Could I root against this man? No. No I couldn't."

According to most, the rivalry has never fully been about baseball. People who hire and fire, tend to be Mariners fans, people who get hired and fired, tend to root for the Royals. Or so I'm told. The story begins in the early days of the town, the community was dominated by a number of prosperous families who made their fortunes catching crayfish in the waters of Grass Creek itself, which swells to three feet deep in the spring, when the snows melt.

"Saw a man drown there in '55," says Parrington. "Water up to yer waist in some years. Incredible."

As the crayfish market exploded, so did the fortunes of Grass Creek, where those connected with the business end of the trade came to control most aspects of town life. They called themselves "Mariners" as a mark of pride. By sheer coincidence, most of the nicer residences were built on the west side of town, the Seattle side. The drive takes 14 hours and 29 minutes from that side, as opposed to 14 hours and 30 minutes from the eastern section.

"The town was always going to be divided simply because of geography, you had these two hugely popular teams, with Grass Creek in the middle" says Tom Light, the author of 100 Years of Grass Creek: Stories, Rambles and Yarns. "But 'Mariners' had always been a loaded word around here, and when the team showed up, people gravitated. It was aspirational."

However, that story doesn't entirely hold up according to some. Jim Oliver, who identifies as a Royals fan, disagrees. "The Crawfishin' industry dried up in the early '60s. Has nothing to do with it. Everybody in this place who has ever wanted to be serious or liked camping or thought about art or any of that, they've always liked the Mariners. This idea that they're the old aristocracy of the town is a pleasant lie they tell themselves."

The Mariners won with a formula, which the Royals copied on their way to their own string of dominance. Everyone admits to this, on both sides. It just happens to annoy one side much much more.

"You're going to win with Yuni and Bloomy and Guillen and Ho-Ram too? How original Dayton Moore," Smith tells me.

Walking across Grass Creek's intersection, I can't tell the difference unless I see a "Kendall" or "Smoak" written across someone's back. (Or lower back, as a lady or two has shown me.) But then, that just marks me as an outsider.

"This feller here," Parrington points, "See how he's got that bit a sharpness to his sideburn? He could tell ya when the next bus to Seattle leaves, easy."

But Kanekoa Texeira -- the latest Mariner turned Royal -- doesn't inflame the passions like the others once did. He's the latest mascot, but he's no Yuni. In a stunning development, the Royals parted with Yuniesky Betancourt this winter, despite the widespread belief that he was the best shortstop in the game.

An argument over Betancourt produced a stabbing last year, when a jilted Mariner fan brought up the UZR stat. "Typical Seattle [garbage]" Oliver tells me. "Oh wow, you used a computer, here's a cookie."

Oliver, who calls most of his friends and family Royals fans, will watch every inning of the Royals-Mariners series this week. "Bragging rights 'til next time," he says with a smile.

Packing to leave, I looked across a vacant lot, where I saw a conveniently placed cabal of disaffected looking youths. Face down in their phones, they were texting away. Perhaps to each other, perhaps to friends somewhere else.

Their response was not printable. Main Street, all decked out in contrasting blue and white and blue and green bunting, seemed not to speak to them.