Luke Hochevar and His Pitching Struggles

Share All sharing options for: Luke Hochevar and His Pitching Struggles

After much research, we were both right. I will try to keep the explanation as simple as I can. 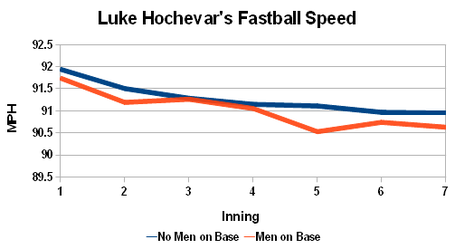 Luke loses about ~1 MPH from the 1st to the 7th innings. Also, he loses ~0.33 MPH when he pitches from the stretch. Mike Fast has looked into the average increase in Runs Allowed per 9 innings to be -0.26 for every MPH decrease in speed. So in Luke should expect and increase of R/9 of about 1/3 of run. This change doesn't explain all of Luke's drop off, does explain some.

Luke gets hit with two blows against him as a game goes on. First his fastball slows down and becomes easier to hit. Once hitters begin to get on base, Luke has to pitch from the stretch. While pitching from the stretch, his velocity decreases even more making his pitches even easier to hit. This double blow was evident last Wednesday when he took a perfect game into the 6th inning and then the wheels just came off for him after the first hit.