Has Kyle Davies Release Point Changed? Does it Matter?

Share All sharing options for: Has Kyle Davies Release Point Changed? Does it Matter?

Kyle Davies has been a hot topic recently, thanks to a Royals Authority post that suggested that Davies is the worst pitcher in baseball history. His ERA so far this season, 6.23, has been awful, but as Will pointed out, his peripherals seem to suggest that he has been an above average pitcher this year. His FIP is now 3.24, which would be a career low if it is sustained over a season. His tERA is 3.38, which means that based on the type of batted balls he has given up this season (groundballs, flyballs, or line drives), one would expect his ERA to be 3.38. Both advanced metrics suggest that Davies has been better this season than his ERA suggests, and has been better so far this season than he has ever been in his career. There is an issue with small sample sizes here, he has only thrown 26 innings this season, and has put up horrible numbers in the first 706 innings of his career. However, there are some changes to his numbers this season and pitch f/x graphs that warrant a closer look.

When dealing with small sample sizes, we need to check to see if he has gotten lucky or unlucky to start the season. Davies so far has been unlucky while giving up hits and stranding runners, but has been lucky with the amount of home runs he has given up so far. So far this season, Davies has a BABIP of .370, while last year it was .316. So even if you think Davies has made no progress, he should start giving up fewer hits per game as the season goes on based on regression to the mean. Davies has a strand rate of 58.7%, but had a strand rate of 66.9% last season. So we can expect Davies to strand a few more runners that reach base as the season progresses. His HR/FB ratio so far has been 2.8%, while last season he posted a 7.9%. So even if Davies has made substantial progress as a pitcher this season, we can expect him to give up a few more home runs this season than he is on pace to allow.If we increase his season's flyball percentage to 7.9%, Davies would have given up three home runs this season compared to one he has actually given up. That would make his FIP 4.28, which would still be the best season he has ever had.

Some people would argue that I should compare Davies numbers this season to his career numbers, not last season's numbers. I choose to use last season's numbers because it was Davies first full season throwing a cut fastball. The cut fastball debuted in 2009, but was only thrown 11% of the time. Davies threw the cut fastball 26% of the time in 2010, which coincided with him pitching better in 2010 than in 2009. His ERA, K/BB, HR/9 and FIP were all better in 2010 than in 2009, and so far this season, all those numbers except ERA have been better as well. Has Davies done anything different this season that would explain why these numbers are better?

There does appear to be a difference in his pitching; his release point seems to have dropped since the beginning of last year, and his pitches are getting more horizontal movement this year than last. This shift appeared to start last year, and it seems to have been gradual. If you compare pictures of Davies throwing this year compared to other years, you can see the difference. While it is hard to find pictures of Davies in the exact same spot in his motion, you can get close enough to notice a difference. 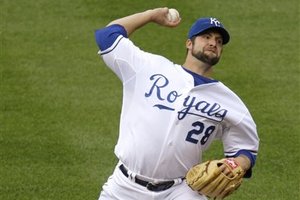 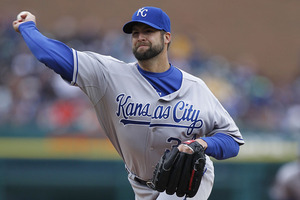 These aren't perfect comparisons; the camera angles are different, and Davies is a little farther along in his motion in the most recent photo. You can, however, see that the angle that the arm is forming is different in both pictures, and that Davies will release the ball higher in the first photo than he will in the second photo. The pitch f/x data helps reinforce what you can see in this picture; Davies release point is dropping. 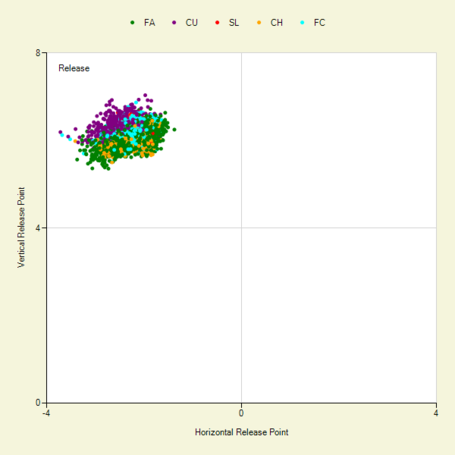 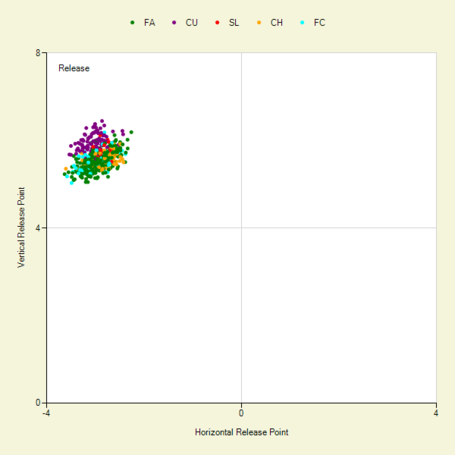 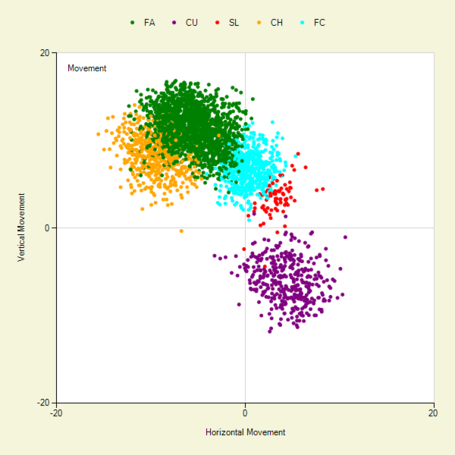 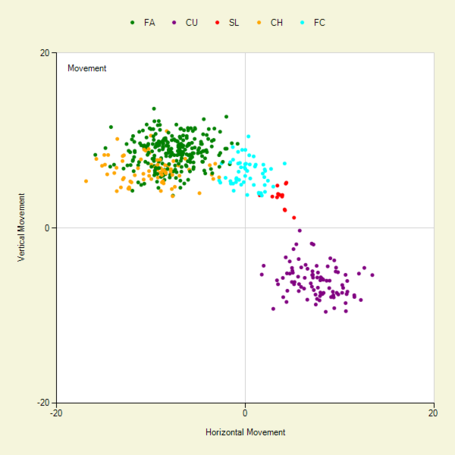 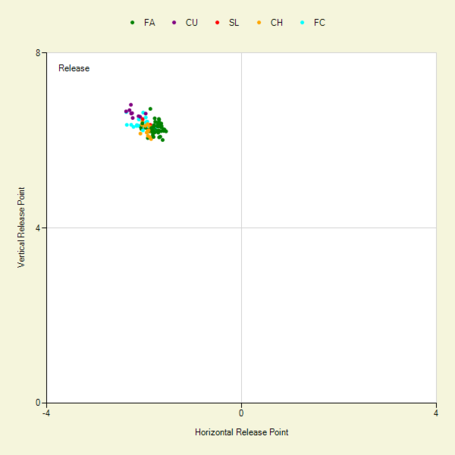 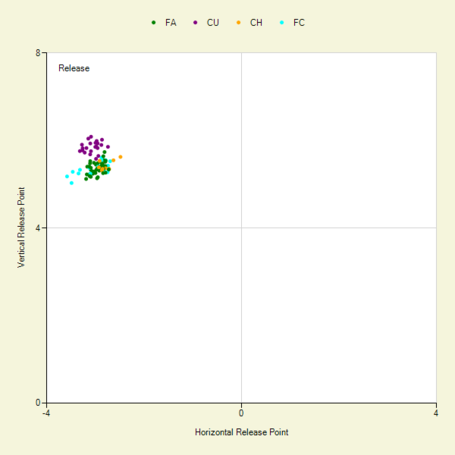 We can see at the beginning of last season, Davies was releasing the ball with his arm shaped like an "L," the traditional and fundamentally sound way that many baseball coaches teach (You form a "T," than an "L," than an "O."). At the start of this season, Davies has been releasing the ball with his arm at a (roughly) 45 degree angle instead of the 90 degree that is created when you throw over the top. These change in arm slot correlates with an increase in horizontal movement in Davies pitches, especially his fastball and curveball. 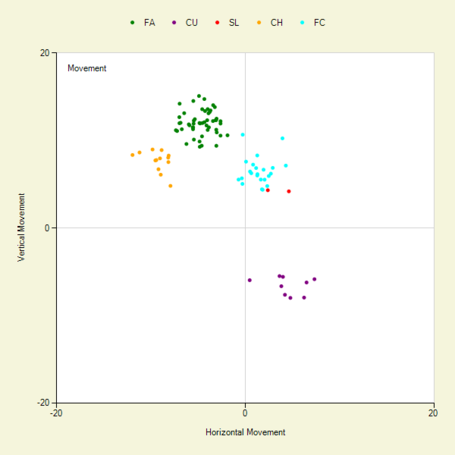 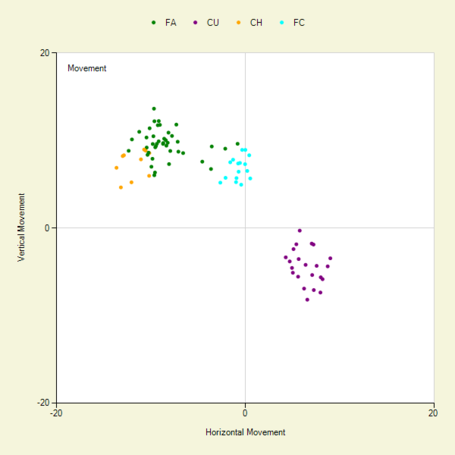 All of these numbers added together seem to contradict themselves. How can Davies be pitching better with a higher line drive percentage and a lower ground ball percentage? How are players making more contact inside of the strike zone against Davies but are making less contact outside of the strike zone? What has been caused by good luck or bad luck so far? What will numbers will regress to his average, and what numbers will continue to be different this season? Are these changes in his statistics caused by random variation within a small sample size, him changing his arm slot, something else we don't know about, or some combination of all three?

This is part of the reason baseball can be so rewarding and so frustrating at the same time; sometimes, you simply do not know the answer. It seems reasonable to say that Davies arm slot has changed since the beginning of last season, and so far, his pitches have more horizontal movement this season than they did last season. That is, however, all I can say with any sort of confidence. The fan in me wants to believe Davies has intentionally changed his arm slot, has gotten better results because of the change, and will continue to be an above average pitcher this season. The skeptic in me believes that the changes in numbers, release point, and horizontal movement are simply due to a small sample size, and Davies will continue to have a 5 run ERA all season. In spite of my natural skepticism, the change in Davies release point and numbers so far this season have me hopeful that he is trying something new, and these new results have been caused by this arm slot change. I know I will be paying extra attention to Davies release point and numbers this season to see if he has turned a corner, or if these first starts have simply been a mirage.