Over the last two nights the Royals have had 2 new starting pitchers make their major league debuts.  Here is a quick look at the types of pitches they throw and speed of each pitch

Last night Danny had his pitches classified as 5 different types, but really only throws 3 (he is working on a slider). Here is an image of the pitches and the spin angle: 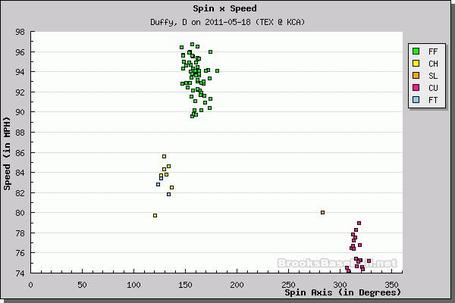 Though they are not easily seen on the image, the pitches that label as two seem fastballs (FT) are grouped with the change ups.  The only pitch that is a little tough to label is the pitch labeled as a slider and is to the left of the curve balls.  For now, I grouped it with his curve balls.  Here is data, once the pitches are correctly labeled:

It is nice to see a fastball from a starter that averages over 90 MPH and can break 95 MPH.

I had a little harder time classifying Everett's pitches.

First, it should be noted that he does drop to a different slot when throwing to left handed hitters as seen here: 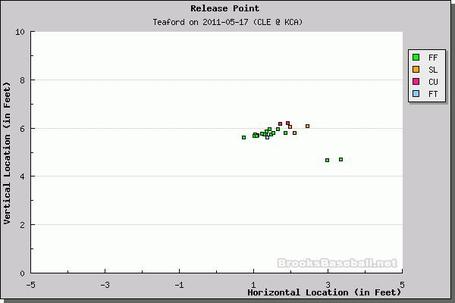 Also, he seemed to throw only 2 pitches last night as seen by the plot of spin vs speed. 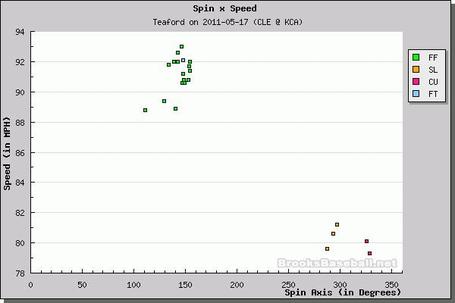 There looks to be two pitches grouped together.  I found from 2 sources (Dayton Moore and Greg Schaum) that he basically throws 3 pitches.  A four seam fastball, a change and a curve.  It looks like he has yet to use the change up and has just gone with his fastball and his curve. With that information, here is Everett's pitch data from the 17th (I didn't include the 2 pitches from last night):