What is Francoeur Doing Differently This Season?

Share All sharing options for: What is Francoeur Doing Differently This Season?

I am pleasantly surprised to see Jeff Francoeur doing so well this season.  I have decided to go and look to see what changes he has made that could be behind the increase in production.

The biggest change by far has been his increase in power as seen from the following stats:

His power is definitely up, especially his home run hitting power which is twice its normal value. Some of the increase can be explained by his increase in BABIP, but a 22 point difference, especially this early in the season, is not totally unexpected.

Moving onto his batted ball data, some more information can be revealed:

Kind of a weird mix of data there.

Jeff does not have the ideal pattern of a player hitting for more power, increases in both ground balls and infield flies, but his ability to hit fly balls out of the park has doubled.

Looking a little further, it can be seen where is the park he is hitting the home runs.  Here graph of the where Jeff is hitting his home runs (-45 is left field line, +45 in right field line) 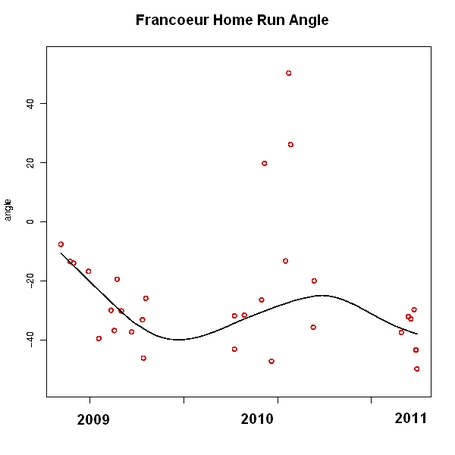 This type of pattern of putting the ball in the left field corner for home runs is the same approach that Jose Bautista is using to become one of the leagues best power hitters.  Jeff is not even close to putting out Bautista type numbers, but he is taking advantage of the shorter fences in left field.

It seems that he has changed his approach this season for the better. Dare I say. I think I will. Yea, I will go there. It looks like Sietzer may have made a change in Jeff's approach and it is leading to more production.  Thanks Kevin for helping Jeff out.  Also, thanks Jeff for listening.