Share All sharing options for: Has Billy Butler Reached His Offensive Peak?

Yesterday, I posted an article on the background and implementation of position player aging curves. I have extended that work to create a hitting aging curve for players similar to Billy Butler. The results generally surprised me.

Billy is a rather unique player that he hits for high average, high power (home runs and doubles) and has zero speed at an early age. To create the curve I needed to find some similar players. Also, I didn't really care about his defense and positional adjustment since these values are already set since he is primarily a DH. I decided I would look at players with the following attributes:

Looking at the most similar players at baseball-reference.com through the same age (which will generally only look at the same position), some the names are the same:

As a whole, a decent group of players.

One problem I have with aging curves is that they are generally a little rough unless I have about 50 samples in my query. I decided to loosen the criteria a bit, (AVG down to 0.280 and 2B down to 30) and got 65 total players. Using these 2 groups of players, here is the aging curve for the 22 similar players, the 65 similar players and the overall population: 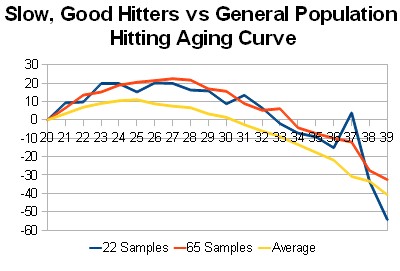 Note: The peak for the 2 groups of similar players in higher than the general population. This difference should not be a surprise because if a player is hitting over 0.280 with at least 30 doubles, they are going to be a fairly productive player.

The main point to get from this data is that the hitting aspect from this type of player generally peaks at age 28 vice 25 like the general population. Billy is currently 25 years old, so his hitting should not begin to decline for another 3 years. The Royals seemed to have him locked up over his prime hitting years.

Different types of players age at different rates. Billy's type of hitter (slow and good) historically age better than the average player. Since he has not reach his offensive peak, it should be taken into consideration when looking at his future value.