The best minor league organization in the history of whatever will get even bester this week as MLB holds their June Rule 4 Amateur Draft. Here is a quick primer on what you need to know for this week's draft.

The Rule 4 Draft is limited only to amateur players from America (and American territories such as Puerto Rico) and Canada. Players from the Dominican Republic, Mexico, Japan, Cuba, etc. are not subject to the draft. Eligible players must have not signed a pro contract and (a) graduated high school but not enrolled at a four year college; (b) attended a four year college and either completed their junior season or reached age 21; or (c) attended a junior or community college. 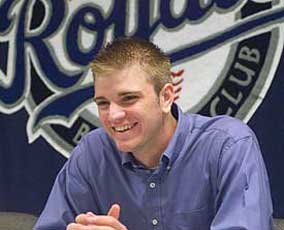 Chris Lubanski, you will remember this day for the rest of your life.

Draft order is determined by last year's record. The Royals will select fifth (then 65th, 95th, and 126th and every 30th pick after that). Teams cannot trade draft picks. In the first three rounds, teams will receive another team's pick under certain circumstances, if they signed a free agent away from that team. This is why Tampa has eleventy billion picks. MLB also awards teams compensatory picks between rounds for losing free agents - commonly called "supplementary round picks" or the more deliciously titled "sandwich picks."

Players generally have until August 15 to sign a contract with the club that selected them, or else they must re-enter the draft the next time they are eligible. Players generally sign at 11:59 p.m. and 59 seconds on August 15. Players previously selected by a club must grant permission to be re-selected by that club. Players cannot officially hire agents, although they can be "advised" by agents. If a player selected in the first three rounds fails to sign, the club receives a compensatory pick one pick later in the next draft (i.e. the Royals would receive an additional pick - the #6 overall pick in 2012 - if they fail to sign the #5 overall pick in 2011).

Now, for some Royals draft history.

Royals Hall of Famer George Brett was selected in the second round of the 1971 draft, the 29th player selected overall. The Philadelphia Phillies took Hall of Famer Mike Schmidt with the very next pick.

The most Wins Above Replacement for any Royals first round pick was Johnny Damon, their supplemental pick in 1992, and Kevin Appier, the ninth overall selection in 1987. Both tallied 49.9 WAR in their careers. Along with Damon and Appier, only two other Royals first round picks have tallied 10.0 WAR or more in a Royals uniform - Willie Wilson (1974) and Zack Greinke (2002).

The Royals have drafted 54 players in the first round or supplemental round. Nineteen of them failed to ever make the big leagues (although three - Mike Moustakas, Mike Montgomery, and Christian Colon, still may).

Thirty of the fifty-four first round picks were taken out of high school, twenty-two from college, and two were selected out of independent leagues (Luke Hochevar and Aaron Crow). Only twice have the Royals selected a first rounder from the same school as a previous first rounders. They have twice selected players from Cal-State Fullerton (Brent Mayne, 1989; Christian Colon, 2010) and North Carolina (Scott Bankhead 1984; Kyle Snyder 1999).

Overall in the draft, the Royals have drafted more collegiate players from UCLA - seventeen - than from any other college program. What makes this even more curious is that UCLA, while a good program, has not historically been one of the powerhouses of college baseball. Among the Bruins selected by the Royals include Sean Berry, Mike Magnante and Jeff Conine who was amazingly taken 1226th overall, in a round in which only three other teams were even drafting.

Programs Most Drafted From, Royals History

The Royals seem to draft a higher number of Stanford (nine) and North Carolina (seven) grads than other clubs. They draft very few Miami (three) or LSU (five) players despite those two programs churning out some of the highest number of professional players. The Royals have taken eleven Kansas State Wildcats, eight Wichita State Shockers, seven Missouri Tigers (eight if you include Aaron Crow), and four Kansas Jayhawks.

Awesome names the Royals drafted but we were deprived of seeing in the boxscore:

5. 1991 – First rounder Joe Vitiello was thought to be the elite slugger in this class, but it was actually tenth rounder Mike Sweeney who would become a franchise player. Tennessee third baseman Joe Randa was selected in the very next round. The Royals would select seven other future big leaguers, including utility player Shane Halter.

4. 1987 – The Royals drafted twelve players would go on to reach the big leagues, although four of them failed to sign with the Royals. Among the eight that did were Kevin Appier, Jeff Conine and Terry Shumpert.

2. 1981 – The Royals selected a local kid in the 22nd round by the name of David Cone. Second rounder Mark Gubicza turned out to be a twenty-game winner. Seventh rounder John Davis turned into a valuable pitching prospect to be packaged (along with Hibbard and Melido Perez) to acquire veteran Floyd Bannister. The Royals would also draft, but fail to sign future big leaguers Shane Mack, Mark Williamson and Rick Rodriguez.

1. 1971 – Kansas City landed a future Hall of Famer in George Brett. Even if they didn’t draft anyone else, this is number one. But they also landed a nice swingman in Mark Littell.

5. 1998 - The 1990 draft gets a dishonorable mention for producing just three big leaguers (Phil Hiatt being the best), but the Royals didn’t get to pick until round three. So give the edge to 1998, in which the Royals had the fourth overall pick and used it on a polished "closer to Major Leaguer ready" pitcher named Jeff Austin. Pitcher Chris George would be the only other big leaguer of note taken by the Royals, although four others selected would reach the majors.

4. 1977 – The Royals passed on Dave Henderson, Kevin Bass and Mookie Wilson to take pitcher Mike Jones who turned out to be a mediocre reliever. Unfortunately he was about the most valuable player from that draft class. Pitcher Renie Martin was the only other player to have significant playing time in the big leagues.

3. 1970 – I guess it took a bit to get the talent pipeline going because the 1969 and 1970 drafts were pretty awful. 1969 at least produced slugger Al Cowens and can be excused because Major League Baseball gave the Royals the second to last pick. But in 1970, the Royals selected eighth overall and took catcher Rex Goodson, who never reached the big leagues. The only player from the Royals 1970 draft class who reached the big leagues was Tom Poquette, who was a serviceable outfielder for a few seasons.

2. 1976 – Acquiring Ken Phelps may have raised the ire of Frank Costanza, but it was actually the only good move the Royals made in the 1976 draft. Phelps only spent 27 plate appearances in a Royals uniform, but that’s twice as many as Jim Gaudet – the only other big leaguer the Royals would take in that draft – would experience. In the first round, the Royals would pass on Mike Scioscia and Bruce Hurst and instead selected Florida prep pitcher Ben Gryzbek, a great Scrabble name, but not a big leaguer.

1. 2001 – Colt Griffin - his name still haunts Royals fans today. The Royals wasted their ninth overall pick on a Texas kid who had only been pitching a few years, but could throw 100 miles per hour. It was a move that seems not only foolish in retrospect, but was roundly mocked at the time. In the second round they took one of the top prospects in the country – in football. Roscoe Crosby never played an inning of professional baseball (although he did cash in his bonus). The best player from this draft class was….utility infielder Angel Sanchez, who posted a .635 OPS in 431 Major League plate appearances. Outfielder Mel Stocker and pitcher Devon Lowery were the only others to reach the big leagues. The draft was the culmination of years of thriftiness on the part of David Glass and incompetence by Allard Baird that culminated with an epic failure of a draft that certainly set the franchise back years.