On Wednesday night Joakim Soria threw 40 pitches against the Yankees and he seemed to be all over the place.  I decided to go see if there have been any changes in his approach using Pitch FX data.

First, here is a plot of his fastball speeds over the past 4 years.  As it can be seen, his last game was near an all time low in speed with not one of fastball touching 93 MPH 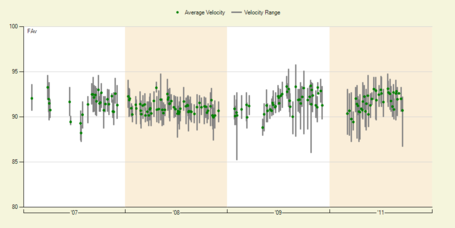 The decrease in speed over the last few games is fairly noticeable.

Another factor I noticed is a change in his release point.  I took a game at home (same Pitch FX system) that he threw quite a few pitches (28) and a June 9th game made the cut.  Here is a comp of the two release points:

It can be seen that he is releasing the ball closer to 3B (image from catcher's perspective). I don't know if this is due to a new foot placement on the mount or a new arm angle, but it about a 6" difference.  This change in release point, no matter what the cause, could definately be effecting his control.

Soria has not been himself recently and it could be caused by a drop in velocity and a new release point.