Catching Up With the 1994 Royals: Part 1 Kevin Koslofski

Share All sharing options for: Catching Up With the 1994 Royals: Part 1 Kevin Koslofski

The following is a guest post by Clam Simmons, a librarian living in New England. Clam is not my pen name or persona. Clam is on twitter @orangehunchback. He recently contacted me about writing a series of pieces about the 1994 Royals. These are their stories. 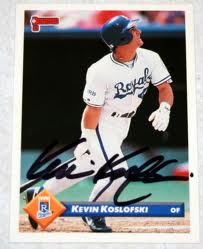 Earlier this year Koslofski opened up KevKo's Bar and Grill in Bismarck, N.D. It was successful for several months before Koslofski made a seemingly innocuous decision to bring out a new line of appetizers. Koslofski named the appetizers after dog breeds in hopes of raising charity for a local animal shelter. Unbeknownst to Koslofski the unofficial bad boys of Bismarck radio, Old Broom and Dr. Turd got their hands on the menu.

I recently met up with Koslofski at the soft opening for The Brew Cage the batting cage/ bar Koslofski opened with Bob Hamelin last week. He wanted to assure Royals nation that he's put KevKos behind him. He feels that with the lessons he's learned from this last trip to the plate his next swing will be a bigger hit than his first home run, a 400-ft joyride off of Nolan Ryan.

So what happened with KevKos?

I'm at home. I'm brushing my teeth and I get a text from long time business partner Rico Rossy. Rico says that a bunch of radio nerds on the other side of town named Stool or Fart or something took my interview and spun it to make it sound like Kev-Ko's serving dog meat left and right.

How did you respond?

I got on the phone with those yahoos and told them to knock it off. I told them to call off the dogs and to quit reading my menu over the air with the going back and forth between the Jaws soundtrack and the sound clips from Homeward Bound.

Obviously you didn't use dog meat in any of the appetizers and ninety percent of people aren't going to take anything they hear on a radio show hosted by someone named Dr. Turd seriously so what were you worried about?

Listen I dig that style of humor, Ghostbusters is my favorite movie but if anyone says anything negative about my business when my business is still being potty trained I am going to try and protect it. KevKos wasn't a frickin Applebees where if the Applebees in Wichita is doing bad the one in Chanute can pick up the slack. So hell yeah I threatened to sue them until I got that station manager to issue an editorial during rush hour retracting anything negative about KevKos.

I have obtained a copy of the menu Mr. Koslofski and I am going to read through a list of the appetizers and I just want to get your gut reaction when you hear these items.

My first instinct is pride. When I hear the names of those appetizers it reminds me of the first night we opened the doors and we just had all this foot traffic. Me and Rico had so much adrenaline from that first night we didn't close the doors till two in the morning. My second instinct is regret because I really feel like it was my fault for ruining KevKos. When I named those appetizers I thought that I was doing a good thing but turns out I was actually destroying my business.

Tell me a little bit about The Brew Cage.

I'm glad you asked. When KevKos closed Bob Hamelin called me up and was like it's time to open The Brew Cage. We had talked about it for years. We're hoping to add a microbrewery at some point but right now The Brew Cage is basically a three way collision between plasma screens stocked with the MLB network, the king of beers and machine pitched fastballs.

Can you explain some of the décor?

Thankfully the Hammer kept every home run ball he ever hit and every baseball bat he used to hit them. That's eighty percent of our decorations right there. The other twenty percent is every jersey I ever wore from little league to my time with the Brewers plus some Wally Joyner signed lithographs.

How much does it cost to take a few cuts in the batting cages?

It's free but we do add a gratuity for the beers and we are strictly B.Y.O.B. so bring your own bat but don't bring in your aluminum bats because we don't want everyone's ears ringing.

This looks to be a great enterprise.

Clam Simmons is a librarian living in New England. You can follow him @orangehunchback