The Royals Bullpen Likes To Pitch Outside

Share All sharing options for: The Royals Bullpen Likes To Pitch Outside

I was looking at Greg Holland's Pitch F/X data on Fangraphs in an attempt to figure out how he has been so successful this season. His game charts for the season are pictured below (all images from fangraphs.com): 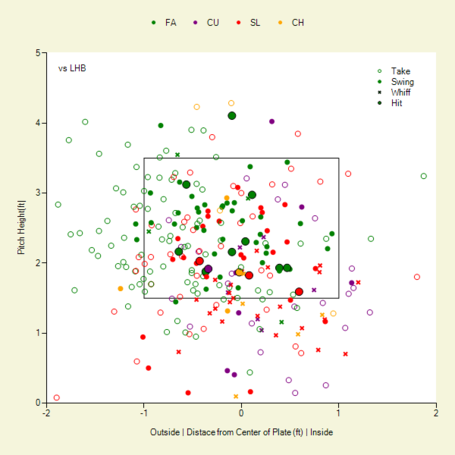 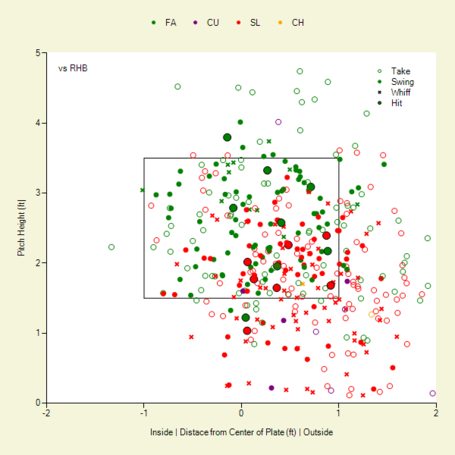 As you can see, Holland makes a clear effort to pitch low and outside, no matter what type of batter he faces. I compared his Pitch F/X Data to the other members of the Royals bullpen, and found that in almost all circumstances, the Royals bullpen pitchers appear to work or attempt to work away from hitters. 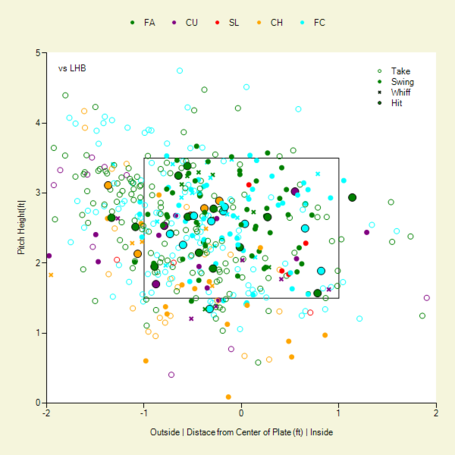 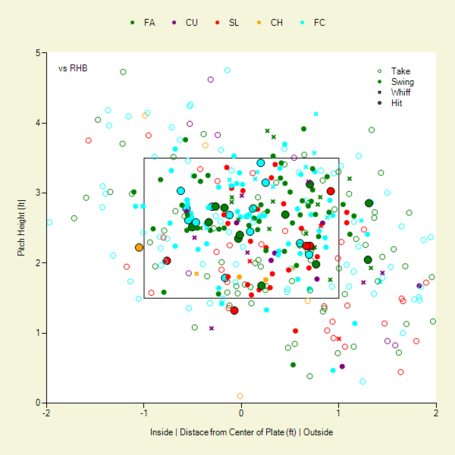 Soria throws most of his pitches towards the outside of the plate, but has kept the ball up higher in the strike zone compared to Holland this season. That could explain why Joakim has not been as effective of a pitcher this year. 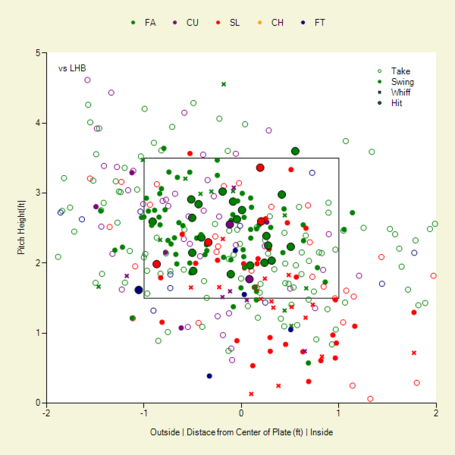 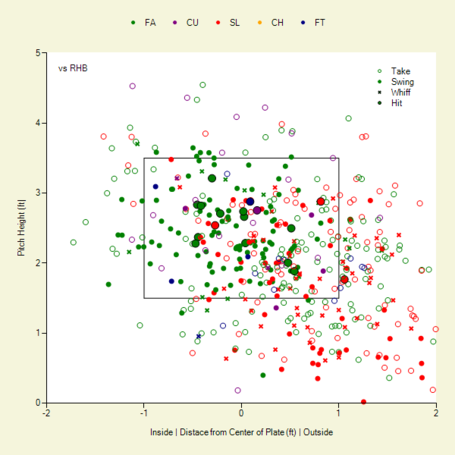 Crow against left-handed batters is one of the few exceptions to the Royals throwing mostly outside rule, presumably using his fastball on the inside to set up an inside slider with two strikes that will break hard towards this feet. 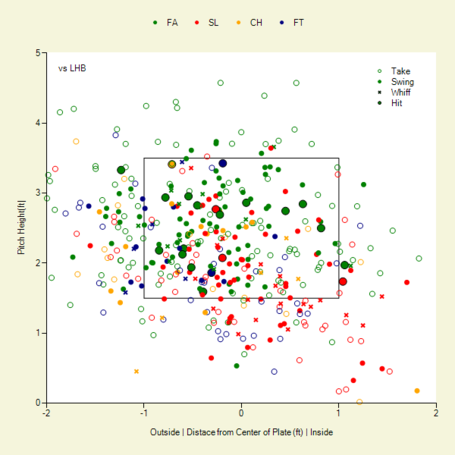 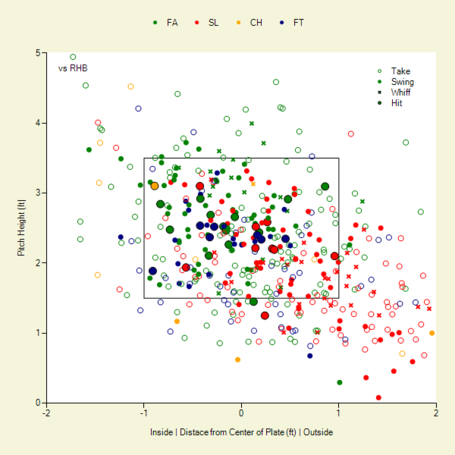 Wood appears to throw more low and outside than in any other spot on the chart, but has also grooved more pitches down the middle of the plate than the others. 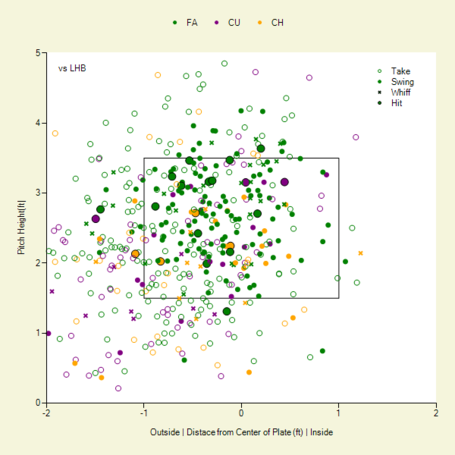 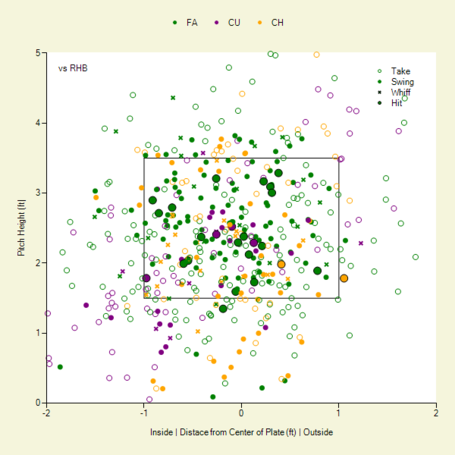 Collins stays away from left-handed hitters and seems to be trying to stay away from right-handed hitters as well with less success. The southpaw works higher in the zone than the other relievers, which I would guess is more of a control issue than a different approach. 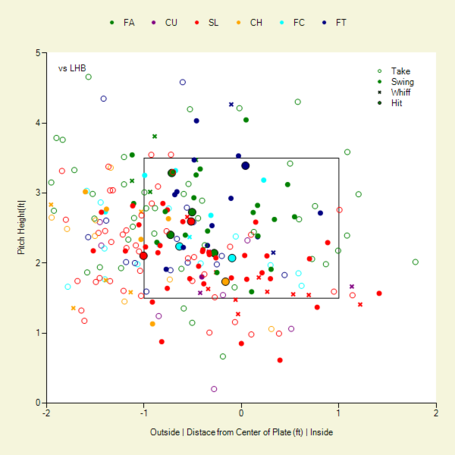 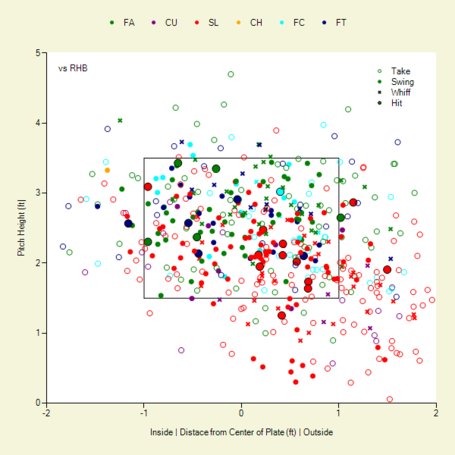 Coleman seems to work inside against right-handed batters more than his teammates, but still shows a strong tendency to pitch away from the batters.

Looking at the Pitch F/X data, it appears safe to conclude that somebody is telling the bullpen to work away from the batters. I would assume it is McClure/Yost personal philosophy that bullpen pitchers need to work away from batters, which is not a bad strategy at all. As Jeff pointed out at Fangraphs, where pitchers pitch at the end of the game makes a difference. If the pitcher stays away from a batter, he is less likely to allow a home run while being more likely to allow a hit. The Royals appear to be willing to take the chance of the opposition stringing together a few hits and don't want to let one swing change the game. This seems to be a logical strategy to me, but the Royals pitchers should be ready to pitch inside if opponents attempt to play on their tendencies and stand closer to the plate in the batters box.

In a more speculative point, I wonder if the bullpens tendency to work low and outside has caused some of the high walk rates for some of the pitchers. Overall, the Royals relievers average 4.2 BB/9, fourth worst in the league. The coaches may be telling the relievers that it is not the worst outcome to walk somebody as long as you keep pitching away from the hitters, which is a more debatable point. Either way, I assume we can expect the Royals to continue their bullpen philosophy for better or worse the rest of the season.