In the last post about Danny Duffy, I looked at how his propensity last season to locate his changeup up in the strike zone likely lead to an extraordinarily high BABIP on fly balls. In this post, I will look at how his curveball location is also hurting his BABIP on flyballs.

Duffy relied heavily on his curveball as his strikeout pitch. Overall, he threw his curveball 20.7% percent of the time, his most common offspeed pitch thrown. Duffy increased his curveball usage to 30.7% of the time in an 0-2 count and 39.3% of the time in a 1-2 count, showing he liked to use it (as well as a high fastball) to force the punch out. The southpaw clearly wants his curve to be an important part of his arsenal, but the pitch needs more work. Duffy allowed 2.9 runs below average with his curveball last season, or -.73 runs per 100 pitches. While this is not horrible, it needs to improve to an above-average pitch to continue to be an important part of the young pitcher's arsenal.

Similar to his changeup, Duffy regularly located his curveball in a hittable part the strike zone. Looking at Duffy's heat maps reveals this trend (via Fangraphs). 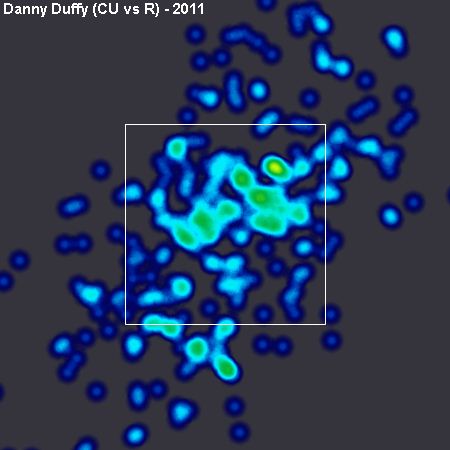 For whatever reason (or combination of reasons), Duffy located far too many curveballs in the middle third of the strike zone. This is problematic, and can be improved upon multiple ways. Duffy can locate his curveball higher or lower in the strike zone, depending on what he is trying to accomplish. Most pitchers with similar curveballs, however, prefer to locate their curveball low and even out of the strike zone. More analysis of Duffy's curveball follows the jump.

Duffy threw a lot of curveballs over the middle of the plate, but he did have some success with those pitches. Looking at his called strike zone from Texasleaguers reveals that he did fool some hitters with his curveball. 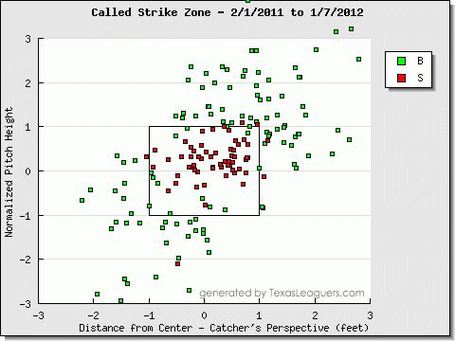 A fair amount of Duffy's curveballs to RHH thrown up in the strike zone went for called strikes, showing that his curveball has enough movement to freeze some hitters. This is one of the reasons why his curveball is a better pitch than his changeup, even though both pitches have location issues. His curveball location, however, leads to less swinging strikes when hitters choose to swing and harder contact.

Over at The Hardball Times, Max Marchi wrote a great piece called "Slicing and Dicing the Strike Zone by Pitch" where he analyzed where each pitch should cross the plate for maximum effectiveness. Marchi had two points when it comes to throwing curveballs:

The curve achieves the best results low and even out of the zone...Let's add a layer that goes from the ground to the lower limit of the strike zone and another one from the higher limit to the sky, and we're done. Curveballs and sliders can be successful in those layers; basically you just have to stay away from the heater's layer ... otherwise you have just thrown a hanger.

Looking at the Pitch F/X heat maps of guys who throw quality curves shows that they normally aim low in the strike zone. The following heat map belongs to Wandy Rodriguez, who owned one of the most effective curveballs last season (via Fangraphs). 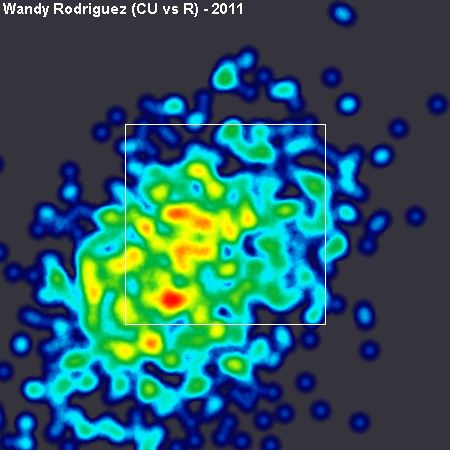 Rodriguez throws a ton of curveballs, so he is bound to leave some over the plate. There does seem to be a clear effort to pound his curveball down and in to righties, something the lefty has done with great success. Rodriguez's curveball is more of a traditional 12-6, than Duffy's, so he is not a perfect example. The next heat map belongs to Jon Lester, someone who has similar horizontal and vertical movement to Duffy. The following heat map is from 2010, because Lester somewhat struggled with his curveball location in 2011 as well. 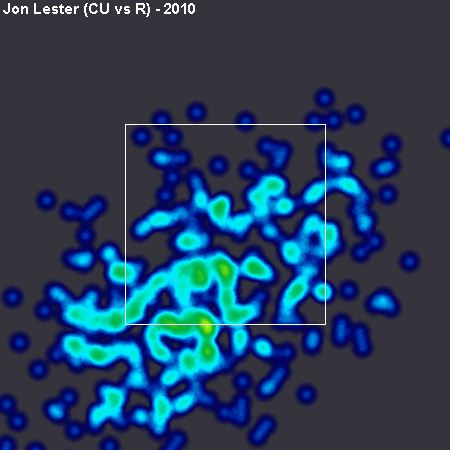 Lester is also choosing to work down and in against RHH, and is not afraid to bury his curve in the dirt. Keeping the curve lower in the strike zone forces weaker contact and more strikeouts. Wandy had a .220 BABIP on flyballs while managing to get whiffs 12.6% of the time. Lester had a .250 BABIP on flyballs while getting whiffs 15.3% of the time he threw a curveball. Duffy, on the other hand, had a .385 BABIP on his flyballs and only had swinging strikes on 8% of his curveballs.

As I stated in my last post, I don't feel qualified to speculate what may be causing both Duffy's changeup and curveball to stay high in the zone. I do feel comfortable saying that Duffy needs to keep his offspeed consistently lower in the strike zone for him to improve into a quality major-league pitcher. Hopefully, the lefty is able to make the necessary adjustments to succeed.