Share All sharing options for: Will Hosmer's Walk Rate Limit His Upside?

With all the glory that is Eric Hosmer, I noticed a small kink in his armor. He doesn't walk much. In 2011 he walked only 34 times in 523 PA or 6.0% of the time. This value is about the same percentage of times Jeff Francoeur (5.6%) and Mike Moustakas (6.0%) walk. A player doesn't really want to be lumped into the same plate discipline comparison as Francoeur.

Using Hosmer's true walk rate, his ranking was not good. Of the 70 players, he had the 62nd lowest value. The good news was that many of the players around him have ended up having fairly decent careers. Here are the players with similar true walk rates:

A Hall of Famer. A few players with really good careers. Just a few players up in the rankings is this guy named George Brett at 5.7%. He was OK. A low walk rate does not seem to be too much of a hindrance for decent career.

What should his walk rate be going forward? Historically, player's walk rates are the lowest at age 21 and look to improve until they are 26 by a total of 2.5% points as seen by this graph. 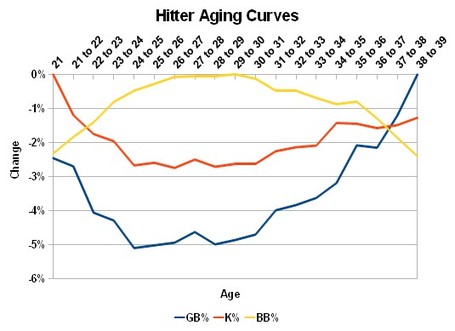 Link to the article on this curve I created at FanGraphs

2012 Oliver projections, which take into account minor league numbers, put his walk rate at 7.9%. That will be a nice jump up from Hosmer's 2011 numbers.

While Hosmer's walk rate was rather low, espeically when compared to similar players, there is no reason to worry about it for now. Young hitters will improve their walk rate over time and Hosmer should not be any different as long has he doesn't take too many batting lessons from Betancourt or Francoeur.