Danny Duffy had the honor of being the first of the Royals highly-touted left-handed pitching prospects to pitch in the big leagues. The southpaw, however, struggled in his first taste of the majors:

While Duffy probably did not pitch as poorly as his 5.64 ERA indicates, a SIERA around 4.46 certainly can be improved upon. Part of Duffy's problems are related to his high BABIP. Duffy's BABIP of .329 is high and he likely had some bad luck last season, but Duffy could help himself by locating his pitches better. The lefty consistently locates his changeup and curveball up in the strike zone, which is an especially serious problem with changeups. Duffy pitching high in the zone with his offspeed stuff likely factored in to his BABIP problems. His BABIP on flyballs was .304 last season, while the league average BABIP on flyballs is around .210. These numbers are even more exaggerated when looking at his offspeed pitches; hitters had a .385 BABIP on flyballs from against his curveball and a .571 BABIP on flyballs against his changeup.

Although there are sample size issues, since Duffy only threw 105 innings, I believe his BABIP on flyballs are so exaggerated that they are likely not caused by luck alone. Looking at his Pitch F/X data only furthers my belief that Duffy is causing some of his own BABIP problems. I will look at his changeup location problems in this article, and plan on writing about his curveball location problems later in the week. After the jump, I will break down his Pitch F/X heat maps for his changeup, explain why it is problematic, and compare it to Ricky Romero's Pitch F/X heat maps.

Duffy did not use his chageup a lot last season, only throwing it 12.9% of the time. He will need to improve his change if he wants it to become a more serious part of his arsenal; the pitch cost Duffy 3.5 runs per 100 pitches. The graphic below is Duffy's heat maps changeup against RHH (via Fangraphs). 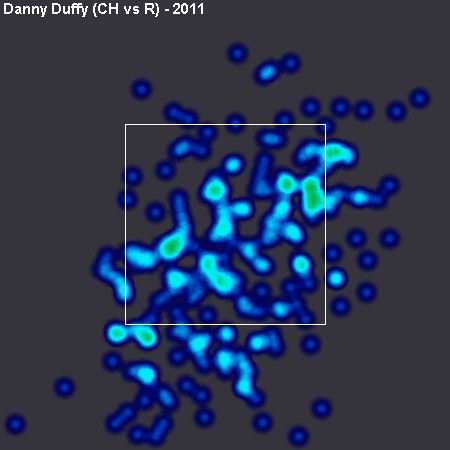 Duffy located the majority of his changeups over the heart of the plate. Unless hitters are completely fooled by the change in speed, they will be able to tee off against those pitches. The first article I linked above, called "Slicing and Dicing the Strike Zone by Pitch," shows the optimal vertical location for a changeup. The graph below is taken from the article: 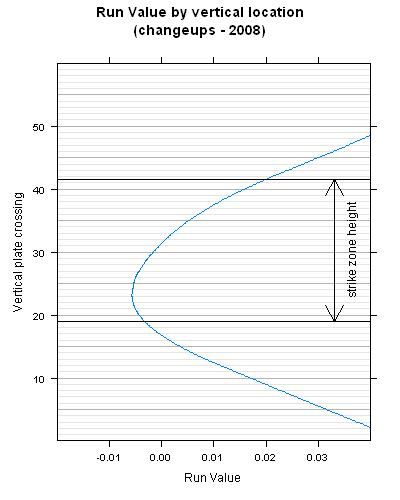 For a changeup to reach it's maximum effectiveness, it needs to be thrown 23.2 inches from the ground at the very bottom of the strike zone. The majority of Duffy's changeups appear to be crossing in between the 30-35 inch mark, where the changeup is an ineffective pitch. Fellow lefty Ricky Romero owns one of the most effective changeups in the league and his heat maps helps explain why (via Fangraphs). 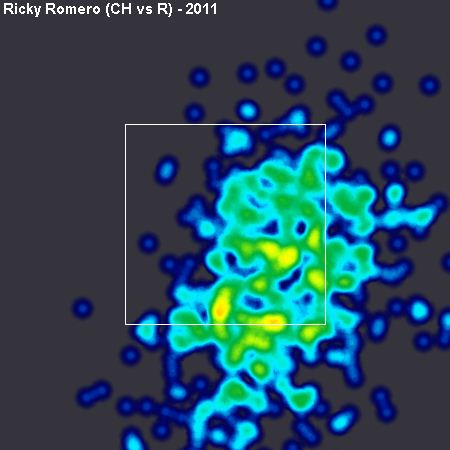 Romero normally locates his changeup low in the strike zone, and feels comfortable missing low and out of the strike zone. He also consistently throws his changeup on the outside part of the zone, while Duffy's were located all over the plate. Although Duffy will likely never throw a changeup as well as Romero does, he will need to pitch low and outside like Romero for it to be a useful pitch.