What Should The Royals Do With Joakim Soria?

The Royals need to decide what to do with former closer Joakim Soria, who will be attempting to return from his second Tommy John surgery next season.

Share All sharing options for: What Should The Royals Do With Joakim Soria?

My friend in the physical realm (who lurks around here as mmiller9) and I were helping out at our church's garage sale fundraiser this past summer, the Sunday of the Futures Game specifically. Since we had already spent too much time lugging in heavy items, we decided to slack off before leaving to Kauffman. Our slacking off included sorting through the clothing that people donated; giving off the impression that we were doing something useful while instead looking for ridiculous clothing.

The garage sale has always provided the youth of my church with fascinating articles of clothing, including full length fur coats, parachute pants and Steve Urkel style suspenders, but the two of us struck gold this past year. Seemingly sent by Hosmer himself were multiple pairs of these socks: 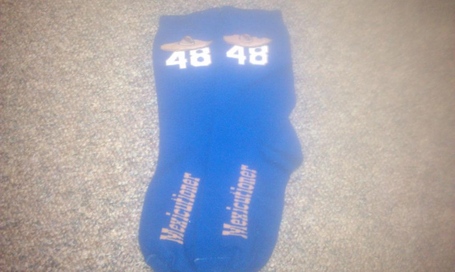 The two of us obviously scooped them, and we are now proud owners. I irrationally love these socks for multiple reasons, including their surprising comfort. The cheesiness is ridiculous, and the word "Mexicutioner" combined with the sombrero strikes me as comically insensitive, albeit in a harmless, naive way. There is something about relief-pitcher themed socks that I find hysterical yet sublime.

The mystery behind them is also compelling, since I have never been able to figure out their origin story. There is no official Royals/MLB licensing on the sock, so their are no obvious indicators who originally made the pair. The socks did not come with any packaging, which likely would have given us enough information to figure out where they came from. I know 810 WHB made Mexicutioner T-Shirts, but doubling down on socks doesn't seem likely. Whomever made the socks, as far as I can tell, never attempted to sell them, causing me to believe that they were made around the time Soria wanted to ditch the Mexicutioner moniker. I am greatly in debt to whomever made them, since they are one of my favorite piece's of Royals clothing I own.

The above lede serves little purpose, other than to show off my socks to a group of people who might appreciate them as much as I do. It should illustrate, however, that I have an emotional attachment towards Joakim Soria (or at least to Joakim Soria-inspired socks), and I doubt I am alone amongst Royals fans. I try not to let my fondness for the pitcher get in the way of sound logic when evaluating his potential future, but it can be difficult. Personally, I want to watch Soria pitch again in a Royals uniform, although the odds are against him following his second Tommy John surgery.

Soria has started to throw again, which is positive sign, but he still faces a long road of rehab. The Royals hold an 8 million dollar option for him next season, but are expected to decline the option and exercise a $750,000 buyout clause. Declining the option is the correct decision, as the Royals should not be in the business of spending a decent chunk of their limited resources on a relief pitcher coming off his second Tommy John.

Dutton writes that "both sides have expressed interest in working out a new deal," which is wonderful for all of us who want Joakim Soria to return. The Royals, however, should not devote much of their time or monetary resources into trying to work out a new deal and need to be comfortable letting Soria leave in free agency.

Judging based on the limited sample of pitchers who have undergone to Tommy John surgeries, Soria will probably never return to his past dominance. Their are only a handful of players who returned from their second surgery who had even moderate success at the major league level. Coming into the 2012 season, there were 19 pitchers who had received two Tommy John surgeries. Out of the 19, only Hong-Chih Kuo, Chris Capuano, Doug Brocail, and Darren Dreifort have logged non-replacement level seasons at the major league level after their second Tommy John. Jason Isringhausen, Al Reyes, Mike Lincoln and Scott Williamson pitched well enough to post ERA's in the 4.50 range for a few token innings, while the second surgery proved to be a death sentence for the other 11 pitcher's major league careers.

Not only is history against Soria returning to form, the Royals have little need for him in the bullpen. The Royals had one of the stronger bullpens in the American League last season, and their four best pitchers are young and cost-controlled. The Royals spending money on a relief pitcher this off season would be a waste of resources, especially with the team's desperate need of a starting pitcher.

Given that the odds are against Soria's future as an effective relief pitcher and the Royals have bullpen depth, it's fairly easy to make a compelling case that the Royals should not offer the reliever a contract at all. I would not mind if the Royals brought Soria back for the veteran's minimum next season, but that's mostly based out off my selfish desire to watch him pitch again rather than any sound baseball decision. If any team is willing to roll the dice by offering Soria a contract well above the league minimum or any sort of multi-year deal, the Royals need to be willing to part ways with their former All-Star closer.

The chances any Royals fan will get to watch Soria pitch again in a Royals uniform is small, even if the two parties come to a contract agreement. Even if he is able to return to the mound against major league competition, the odds that Soria can pitch effectively is not worth any serious monetary investment from the Royals. The Royals should offer Soria a cheap, one-year contract, and if he gets a better contract somewhere else, let him walk, not letting past memories( or socks) cloud judgement about Soria's future.