Is it really a LCS if the Yankees play, but Jeter is nowhere to be found?

The Tigers and Yankees will have to work hard to surpass Saturday evening's fun times. Another Raul Ibanez ninth inning home run, followed by Derek Jeter's ankle snapping and a Tiger extra inning win. Crazy times in the Bronx. Yet there weren't many Yankee fans around to witness this game. Have we passed the tipping point on these post season games? I know Royals fans would snap up those ducats in a second, no matter the cost. Yet when a team is an (almost) annual participant in October, I wonder if fans just decide to save their cash for the World Series.

Anyway, a pair of games today. The Tigers and Yankees get us started in the sparsely populated Bronx. That's followed by the Giants hosting the Cardinals in Game One of their series.

Most pundits have the NLCS as a tossup, with the series going the distance. I'll be honest here... The Giants are my NL/West Coast team. I need a late night team to watch during the summer. Loved them since the days of Roger Craig and Will Clark. Even made a pilgrimage to Candlestick during the '93 season to watch Billy Swift pitch. The Cardinals participation here is just extra incentive for me to root for the Giants. Not that I need it, but it's there.

Here's the lineup for the ALCS: 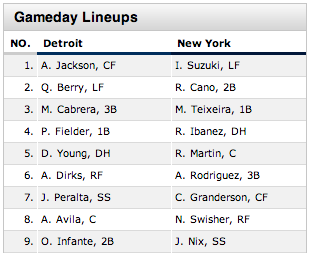