Anyone but the Cardinals.

It's getting kind of crazy, but our man Carlos Beltran now owns a career postseason line of .370/.481/.824. Take your small samples... Uh, that's a pretty decent line. Of course, his October career seems to have been defined by looking at a third strike in with two outs in the ninth inning of a seventh game. Probably didn't help that this offense occurred while playing for a team in New York.

Anyway, this Beltran cat... He's good. And if you don't stop what you're doing to watch his October plate appearances, why are you a baseball fan?

Tonight, it's Chris Carpenter against Ryan Vogelsong. Carpenter is warm and fuzzy. Just like Charlie Manson. The fact he's a Cardinal only adds to his appeal to right thinking baseball fans.

Let's go, Giants. But I am thinking if the Cardinals win, Beltran will have done something positive. 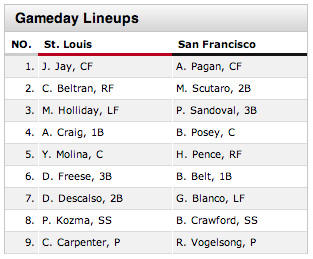