Naturally, when searching for the best pitcher on the 2012 Royals, we start in the bullpen.

Share All sharing options for: Most Valuable Royal - Pitcher Edition

Last week, we voted on the Royals Player of the Year. This week, we turn our attention to the pitchers. We knew going into the 2012 season the rotation would be a challenge. Hopes for a semi-productive starting five were submarined early in the year when Danny Duffy and Felipe Paulino hit the shelf for an appointment with Dr. Jobe. The final numbers from the rotation were ugly: A 5.01 ERA, a 6.49 SO/9 and a 2.04 SO/BB ratio. All of those numbers ranked the starting staff in the bottom sixth in baseball. Not Twins bad, but... Ugh.

I nominated three everyday players for the Royals Player of the Year. I shall nominate three for pitching honors:

Holland's year got off to a rocky start. He allowed 13 hits and four walks over his first 6.1 innings which led to a 11.37 ERA. Following an outing on April 20 where he faced five Blue Jays and failed to retire a single batter, the Royals placed Holland on the DL with a left rib stress reaction. Apparently, the injury first surfaced in spring training, went away and then reappeared during this outing. I'm going to go out on a limb and say and say that affected his April performance. Once he returned to the pen, he posted a 2.08 ERA in 60 innings with 81 strikeouts.

As solid as his 2012 season, his control left a little to be desired. His 4.6 BB/9 wasn't pretty, but he's been a guy who has struggled with the zone from time to time. At least he can counter balance with his strikeout rate and a microscopic 0.28 HR/9.

Herrera was the workhorse of the Royals bullpen, leading the relief corps in appearances (76) and innings (84.1). Like Holland, Herrera was adept at keeping the ball in the park, surrendering just four home runs on the season. And if he can maintain his 56 percent ground ball rate, there's no reason to think he can't continue to stymie major league hitters.

Then there's his velocity. Fast. His average fastball velocity of 97.4 mph was the second highest in the league last summer trailing only Aroldis Chapman. Pair that with a curve that breaks at around 81 mph and an 86 mph slider and you have a reliever who can show three pitches. Obviously, he lives off the fastball, but the change is the pitch he turns to when he jumps ahead. Particularly to left handed batters.

His 84 innings represent a career high, and given his injury history, that will bear watching at the start of next season. He appeared to make it through the season just fine, though. His velocity held fairly steady. 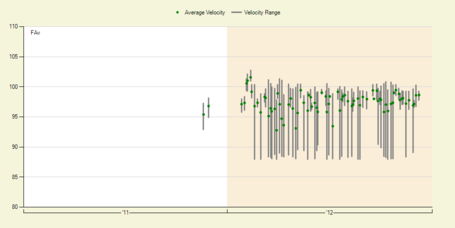 Kind of surprising he whiffed just 8.2 batters per nine, but if he's keeping the ball on the ground, he'll be just fine.

Do we have to nominate a starter? A motley bunch, but you can't deny the success Guthrie had in just 16 starts for the Royals. After the team lost his first three starts, they won 10 of his next 11.

The seeds of his success were twofold and straight forward: He eliminated the walks and home runs that plagued him in Colorado. His 1.9 BB/9 for the Royals would have been the lowest rate of his career and the same could have been said for his 0.89 HR/9.

However, his 4.31 xFIP and Guthrie-esque 5.5 SO/9 don't point to long-term success. And color me skeptical of a 33 year old who doesn't miss bats. Ehh... This is about 2012 though. And he did alright for the Royals. Among starters, he finished second on the team with a 1.5 fWAR, just 0.3 behind Luis Mendoza's mullet.

Plus, Guthrie, gets a point for being Not Jonathan Sanchez.

Ballot time! Who is your Royals Pitcher Of The Year.