Our Time quickly turned to Sour Time. What were the Royals stories of 2012 that tasted like four-week old milk?

Share All sharing options for: The Top Ten Worst Royals Stories of 2012

The season is now over and while it didn't have the stomach-punching suckitude of past 100-loss seasons, there was quite a bit of disappointment over the team's performance. The Royals fell well short of the "close or at .500" pre-season predictions/hopes of many Royals fans and pundits and it looks like Dayton Moore will be on a bit of a hot seat going into 2013.

What were the worst stories of the season? Let's take a look. And do not think we are all doom and gloom here at Royals Review, next week we'll look at the best stories of 2012.

The Best Farm System in the History of Whatever took a step back at the higher levels with serious regression from some of the top prospects. Chris Dwyer posted a 5.25 ERA in AA Northwest Arkansas before "earning" a promotion to AAA Omaha where he was lit up like the Royals crown scoreboard. Mike Montgomery posted a 5.69 ERA in Omaha before being demoted after seventeen starts, then actually pitched worse. Third baseman Cheslor Cuthbert, a man among boys in A Wilmington, posted an anemic .240/.296/.322 with just seven home runs. There were still quite a few bright spots (Wil Myers Jake Odorizzi, Jason Adam, Bubba Starling), but with pitching so dire at the MLB level, it was very disheartening to see two of the top pitchers in the higher levels regress so badly.

I wasn't the biggest Frank White fan, but he was good for revealing some of the nuances of the game at least once or twice a night. Frank also epitomized Kansas City. As a local who grew up in the city and spent almost two decades here as a player, he captured the conservative, conventional wisdom nature of this town for better or for worse, and his folksiness was a bit endearing even as he giggled through yet another awkward Pepsi Max ad.

Rex Hudler, on the other hand, was always an outsider. He had an uphill battle as it was, after the controversial ouster of Frank, but Kansas Citians will always give an outsider a chance to prove himself. Rex's Mountain Dew-fueled energy clashed with Ryan Lefebvre's relaxed Midwestern style. His constant yammering grated on most viewers. Rex was always a utility player who had to give 1000% just to get on the field, but he has unfortunately carried that attitude over to the broadcast booth. We don't need you to try so hard to impress us, Rex. Take it down a notch. Maybe ride the pine for nine, buddy.

For the fifth season in his five-year MLB career, Luke Hochevar underperformed his FIP, and he did it by a lot this year. A 4.63 FIP turned into a 5.73 ERA, which actually is not the worst season of Luke's career. He still tantalizes us with gems like his seven-hit shutout in Tampa in June, but far too often we get performances like his season-ending nine-run drilling against Cleveland. Since he entered the league, Luke is second in the league in most games pitched with a Game Score below 20 (14, behind only Nick Blackburn). But he's about to turn the corner! 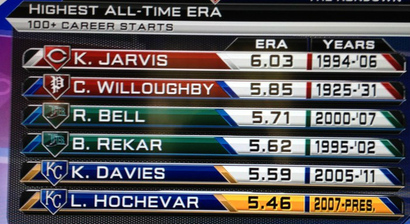 This was perhaps the most surprising disappointment, since the Royals stressed fundamentals in spring training. Doesn't that always work? And they shipped Mike Aviles, responsible for 80% of the pickoffs in all of baseball, out to Boston. And yet, the team continued to run around the bases like a chicken with its head cut off. Doug Sisson took the fall for the giving away of outs on the bases, but things did not turn around once he left. Baseball Prospectus had the Royals 21st in Baserunning Runs and the Royals tied for third in the league in outs on base with 64. The Royals aggressive nature led them to be third in runners picked-off, and they led the league in runners picked-off while trying to steal. They were pretty good when they did steal, but their reckless aggressive approach cost them more runs than it netted.

There was a time when we legitimately felt Moustakas could have been an All-Star selection. Remember that? Those were fun times. He was hitting .272 with 15 home runs and 47 RBI at the break, a perfectly fine season for a third baseman.

Then the bottom fell out. Moose barely hit above the Mendoza Line for the second half, with just five home runs since the Midsummer Classic. He has shown little ability to get on-base via walk and struggles to hit left-handers at times. Moose is kind of a thick kid, so maybe he wore down as the season went on (time to get him on the Billy Butler training regiment?) or perhaps pitchers simply figured him out. But he needs to regain the magic he captured for the first half for Royals fans to have hope for 2013.

A couple of seasons ago, the Royals acquired a shortstop named Yuniesky Betancourt. He had some tools ("plus hands...and plus hands") but a lackadaisical attitude towards playing baseball. He displayed little range, swung at everything, and when they were offered the opportunity to get rid of him through a trade, they took it.

Fast forward to this season, and the same group of men who had seen Yuni not get to ground balls, to not hustle, and to swing at everything, decided that they would bring him back, and play him at a position where more range was required, and hit him near the top of the order. These are men that are considered the peak of their profession and are highly compensated for their knowledge and expertise.

Many Royals fans were nonplussed about the signing, reasoning "he won't play much." But he racked up 215 plate appearances, despite losing several weeks due to injury and being released in early August for a selfish attitude (oh, now you realize he has a bad attitude?). Trading for Yuni in the first place was predictable, but re-signing him and playing him? That was so utterly Royals.

Frenchy has delighted us with his touching fan interactions and zany antics, but his play this season has been just dreadful. In year one of a two-year contract extension, Francoeur has been the worst Major League regular this season. Connor Moylan has wonderfully illustrated how Frenchy put up a near-historically bad season. Over one 35-game stretch in which he had supposedly made adjustments to his swing, he hit .165/.201/.286 in 139 PAs. Overall he has posted an on-base percentage well below .300 all season, and his .143 ISO is below such sluggers as Alexi Amarista, A.J. Ellis, Omar Infante, John Jason, and Tyler Greene. Were it not for a hot month of May, he'd be barely over the Mendoza Line. His defense has become a major liability in right field. He has also cost the team several runs on the basepaths.

Oh, and he's signed for one more year, and conveniently plays the same position as the best minor league position player in our organization and all of baseball. Wonderful.

Hos surprised many with how well he played at such a young age in his rookie season, which made it all the more disappointing when he severely regressed in 2012. Clark has pointed out how common sophomore slumps can be, but with the Royals track record of player development, Hosmer's disastrous season has us all worried about his future. His swing has been broken down and over-analyzed. His timing is off. He's stepping into the bucket. He's not being aggressive enough. He's being TOO aggressive. He needs to have a plan out there. He needs to stop thinking and just hit. Saving Hosmer is going to be job numero uno for the new hitting instructor (Jason Kendall?????).

I'm not sure a more innocuous trade could end up looking so god awful so quickly. It was like if you traded your ham sandwich at lunch to a kid for a banana, and that banana immediately turned rotten while the ham sandwich ended up taking steroids and winning a batting title. I am bad at analogies.

Last winter the conventional wisdom on the Jonathan Sanchez/Melky Cabrera trade was "Cabrera is expendable and probably had a fluke season, Sanchez is erratic but can strike guys out, and hey, we get a AAAA lefty in it too!" At the very worst, people shrugged their shoulders and said "meh" or like dear Will McDonald, said - what's the point of even trading for a guy like Sanchez?

Then Melky Cabrera somehow enhanced his performance and became an All-Star caliber player while Sanchez took whatever substance turns you into a non-caring home run and walk factory and was designated for assignment mid-season. Its hard to fault Dayton Moore too much for this one as his reasoning was sound, but it is inevitably going to be a public black eye when you trade a player away and he wins the All-Star Game MVP in your home stadium. 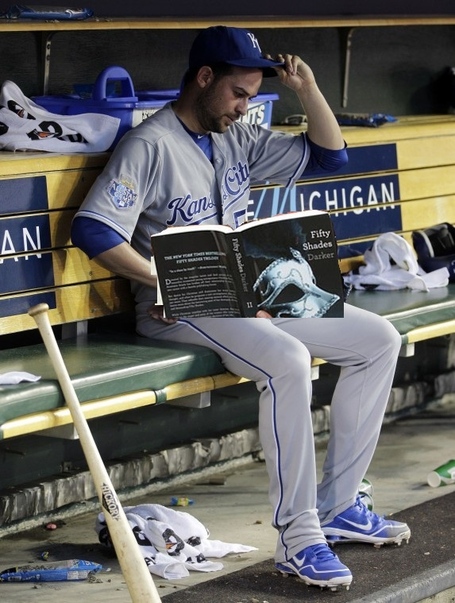 We all knew the team was lucky in its health last year, but I'm not sure we could have imagined the onslaught of injuries that afflicted the team in 2012. Let's look back at some of the more significant injuries from this season:

Even more frustrating, the injuries seemed to afflict younger, more exciting players we wanted to get a good look at in 2012. What cruel fate robs us of Felipe Paulino's fastball, but allows Luke Hochevar to make thirty starts? On the plus side, the injuries provide a convenient excuse to delay The Process by one year, ensuring our trusted leaders will be on the job for the foreseeable future. After all, I can't imagine a team losing its starting catcher, its closer, its starting centerfielder, its starting second baseman, and two of its better hitters and still competing for anything.