Bad swing mechanics are holding the Moose back

Share All sharing options for: Moustakas: Pop Up Royalty

Mike Moustakas had a nice season with the Royals after a somewhat disappointing rookie season. He ended up hitting 20 HRs, but was only able to muster a .242 AVG which contributed to a sub .300 OBP. One of the main culprits for the low average was a high infield fly ball (IFFB) percentage at 18% (the 2nd highest total in 2012 with players that had a minimum of 600 PAs). This value was down from the 21% value he had in 2011. Most IFFB are automatic outs and are huge drag on player's batting average. For Moustakas to bring the number down, he will need to change his mechanics on how he handles high and inside pitches.

The biggest cause of IFFB is from contact made at pitches that are high and inside. If someone wants to read too much on the subject of IFFB, I wrote about the subject yesterday at FanGraphs.com. What I found is that how hitters swing at high and inside pitches has a lot to do with their pop up rate. Even though this pitch is near the edge of the called strike by umpires, it is called a strike over 75% of the time, so hitters can't just lay off the pitch.

To show the difference with Moustakas, I will compare his swing to Butler's. The following is couple of animated GIFs on each hitter handling high inside pitches on 0-0 counts.

Besides the two GIFs, here are some images of the pair when they are at the time of contact on the pitches that are high and inside (embiggen). 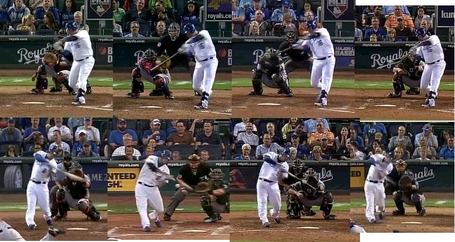 The biggest problem with Moustakas is that he really drops his back elbow. At times it drops below his waist. By dropping his back elbow that much, his swing will be exaggerated upward and the ball will follow this upward path. While Butler is no perfect in keeping his elbow up (far left image), he does a much better job than Moustakas.

The second problem Moustakas experiences is how he positions himself on the inside part of the plate. This placement helps he cover the outside part of the plate better, but he just gets destroyed when he is pitched inside. He moves his hip out to make contact with the solid part of the bat. This movement lifts/slides his front off its plant position. His front ankle looks like it is getting twisted/broke each time he swings at an inside pitch. On the other hand, Butler is able to plant his foot and maintain its position throughout making contact.

Moose's will always have problems with IFFB unless he works on changing his swing a bit to handle high and inside pitches. He has had too many IFFB the last two seasons and it has been a drag on his batting average. If Moustakas does't find a way to make better contact with the inside pitch, his upside will be limited.