Should The Royals Shop For A Second Baseman?

If the Royals are going to upgrade the second base position, they will have to look to the free agent market. Is there anyone who can provide the value the Royals are seeking?

Share All sharing options for: Should The Royals Shop For A Second Baseman?

We all know the Royals are targeting starting pitching this winter. Naturally. Yet while most of the lineup is set, it seems that one large hole remains at second base.

As Clark discussed on Monday, Johnny Giavotella seems to have fallen out of favor. (Or maybe he was never really in favor.) Chris Getz is... Chris Getz. Irving Falu and Tony Abreu are servicable players, but they aren't even close to where you could call them a solution. Christian Colon could be Gio, version 2.0. At any rate, he won't be ready for the 2013 season. It's not what you would call a promising or deep pool of candidates.

So if the Royals are looking to upgrade the second base position, they will have to look at the trade or free agent routes. I could see a deal where the Royals nab a starting pitcher and get a middle infielder in the deal. But we all know any kind of impactful deal like that would mean parting with prospects, which is something Dayton Moore is loathe to do. So if the Royals are to improve up the middle, they are more likely to kick the gloves on the free agent market.

Except the 2012 free agent class of second basemen is weak. Like, so weak it's possible there isn't a player out there who would represent an upgrade at the position. Here is a look at the top three free agent candidates.

So the question is: Can the old man hold off total regression for another season? For what it's worth, he looks the classic late bloomer. From 2002 to 2007, he accumulated a total 3.2 fWAR. From 2008 to 2012 he was at 15.1 fWAR. Not a lot of that is from defense. Although scouts will tell you he's a better than average defender up the middle, UZR isn't a fan.

What Scutaro is, is a contact hitter. His bat touched the ball in an astounding 92.5 percent of all swings. All this contact is great, but as his reflexes slow and his ability to solidly put the bat on the ball diminishes, those liners will decrease and the number of balls that get through the infield will lessen as well. Given his age, that's going to happen at any moment. Then, you're left with a weak-hitting middle infielder on the downward side of his career. Who swings a lot.

Jim Bowden predicts a two year deal for Scutaro at a total of $12 million. He also thinks the second baseman will return to San Francisco. (I know there's a tendency to dismiss Bowden as a kook. Except he was, once upon a time, a GM. Not a particularly good one, but one who conceivably has the insight into how the market evolves and how deals are struck. I would bet that he's within range on the majority of his predictions. By the way, that link is subscription only. If you doubt his accuracy, check the work Grant Brisbee did on his predictions from last year. His track record is strong.) If that's the case, GMDM will have to go into his classic Overpay Mode, which would mean a third year. Late bloomer or not, I can't get behind giving a third year to a guy who turned 37 last month. Bad business.

Scutaro is the type of guy I'd look to if the Royals were just a second baseman away from October, but we know their issues lie deeper. Much, much deeper. In a way, he replaced the production for the Giants that they lost when Melky Cabrera. You know if San Francisco doesn't bring him back, there will be one team on the open market that just can't help themselves and gives Scutaro more than they should. It's tricky business and given the demands that will surely escalate over the next month, it's best if the Royals just move along.

Fun Fact #1: Keppinger was the third trade Dayton Moore made after being named GM of the Royals. On July 19, 2006, he sent Rueben Gotay to the Mets for Keppinger. A swap for out of favor second basemen.

Weird, because Keppinger feels like the prototypical GMDM/Royals player. His career walk rate is 6.6 percent. And his contact rate is otherworldly at 92.8 percent. Sadly, that means while he can put the bat on the ball, his lack of discipline (swinging and making contact on pitches outside of the zone) means he's not making quality contact. Last year, he made contact on 86.6 percent of all swings outside the zone. That was 20 percentage points higher than league average. And had he finished with enough plate appearances to qualify, Keppinger would have finished second in contact rate outside the strike zone... To Marco Scutaro. Despite this, Keppinger finished with a .332 BABIP and 23 percent line drive rate. Unsustainable given his approach at the plate.

Offensively, Keppinger and Scutaro are the same player. Don't believe me? How about this?

One thing in Keppinger's favor is age. He's four years younger. Another factor in his favor is price tag. He won't be as expensive as Scutaro.

Defensively, Keppinger lacks the range the Royals would need from an upgrade at second. According to The Fielding Bible, he was among the worst at his position in 2010 and 2011. (He didn't log enough innings at second last year to be ranked.) Working in his favor is he can play all infield positions.

Keppinger has always hit right-handed pitching better. He is a career .333/.376/.487 hitter against righties, while he's at .269/.321/.358 against southpaws. The 55 point gap in on base percentage and the over 125 point gap in slugging points to a platoon player/bat off the bench type. And when you take into account his defensive versatility, this certainly feels like his role moving forward.

For team that can go out and add to their depth through free agency, Keppinger makes sense. For budget conscious teams with players like Tony Abreu already in the fold, their resources could be applied elsewhere with more favorable results.

Johnson has been in the big leagues for six and a half seasons. Two of those years, he was really good, offensively speaking. His 2010 season was amazing. He set career highs in home runs, runs, on base percentage and slugging. Then, he was middle of the pack for about a season and a half.

The other three years... Awful.

The unfortunate part of his story is his three awful seasons have come in the last four years. I think Nate Silver would call that a trend. And it's a trend you want no part of when it comes to signing free agents.

Turns out Johnson is the anti-Scutaro. Or anti-Keppinger. The guy swings and misses. A lot. Last year, his contact rate of 71 percent. It's no secret he loves the pitch away and expands the strike zone half the time on balls off the outer half. He will also expand the zone up and down. Basically, if a pitcher is throwing a baseball anywhere on the right side of the plate, up or down, odds are better than half that Johnson is swinging.

His strikeout rate, which was manageable early in his career, is now off the charts. Check his rates from the last three seasons:

Prior to this run of whiffs, he was striking out roughly 18 percent of the time. So while 2010 was his best season offensively, it's been all downhill from there.

One thing I find interesting about Johnson, is that as a left-handed batter, in 2009 and 2010 he hit much better against left-handed pitching than when he faced righties. It was a bizarro platoon split. Now, he's lost his advantage against southpaws, and hasn't seen any kind of gains against the right-handers. That coincides with his abysmal last two seasons. 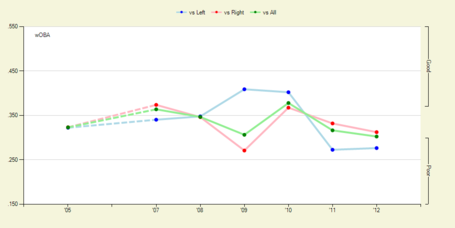 While Johnson's offense has been in decline, his defense has improved a bit. Never the best with the glove - Dayton Moore once remarked his best position was the batter's box - Johnson has improved his range to his left and saved five runs according to The Fielding Bible. He is still a bit slow covering the up the middle, but at this point he can probably be called a competent defender.

As I write this, Johnson feels like a dark horse candidate. The past connection. The one really good season. It's like you can see Dayton Moore in his office, cellphone at the ready, prepared to call his agent with a two year deal at $16 million. With a mutual option for a third year. All it takes is the green light from upstairs.

This illustrates the problem facing GMDM and the Royals. If they are serious about upgrading second base, the free agent pool is mighty shallow. Beyond the three above, you're looking at injury retreads like Placido Polanco. Or senior citizens with enormous eroding talent like Adam Kennedy.

I know there's some interest in Ryan Theriot. Theriot lost his starting job at second when Pablo Sandoval returned from the DL and pushed Scutaro across the diamond. That was the second year in a row he was playing on a contending team and pushed to the bench when his club acquired an upgrade. Of course, Theriot may be a natural for the Royals in that he's a dreadful baserunner. Since we let Jason Bourgeois go and (hopefully) the clock is ticking on Jeff Francoeur, we need someone to carry the mantle of The Royals Free Out. He doesn't own a platoon advantage at the plate and according to The Fielding Bible, gave away 12 runs with his glove. He will be 33 next year and will probably find someone to hand him a one year deal at around $1 million. He's not an upgrade over anyone in the system, so that suitor shouldn't be the Royals.

It's a thin market for the Royals. It seems a trade for a second baseman who can help is unlikely, so free agency is the way for now if they're looking for a quick fix. But since GMDM is always angling for the year after next (Mission 2014!) it doesn't make sense to sign a free agent as a one or two year stopgap. We're left with Giavottella, Getz and a cast of utility characters. And the hope that Colon develops in Triple-A.