Last week, I was going to run this article and just a few minutes before I published it, the Royals signed Guthrie. I figured the following information could wait a week. Since then, I have added a bit on Guthrie's injury chances.

Two weeks ago, the the BBWAA released their list of award recipients and for the first time since 2006, not one Royal received a vote for any award. Zip. Nodda. Truthfully, maybe 2 Royals possibly deserved a vote, Billy Butler and/or Alex Gordon.

Butler won the team's triple crown with 29 HR, 107 RBI and a 0.313 AVG. He was by far the best hitter on the team. Gordon, on the other hand, was the second best hitter. Besides swinging a nice bat, he was phenomenal in the outfield. At the end of the season, he accumulated 5.9 fWAR which was good for 6th in the AL. I was a little surprised he didn't get one vote, especially not a token one from the KC voters.

Speaking of the KC voters, here is how each of the 2 writers voted in the 4 contests.

Early in the season, the Royals bullpen was on pace to throw the most innings ever. With the addition of Guthrie to the rotation, the number of relief innings dropped. They did end up with the most relief innings in the AL (561.1 IP, 2.2 IP more than Minnesota). Also, the Royals were able to stay below the team record of 577.2 innings in 2006.

Finally, a nice big shout out to the Rockies who crushed the previous high by almost 60 innings.

Mike Moustakas loves the outside part of the plate

A couple of weeks ago, I looked at how Moose's batting mechanics where leading him to hitting a high number of infield popups. Some readers wondered about he handles non-inside pitches. Here are for Moustakas swings where he swung at pitches down the middle of the plate and outside.

Guthrie - Is he hurt also?

Once Jeremy Guthrie was signed, I looked at his injury index. The injury index looks for slight changes in a pitcher mechanics late in a game which can be indications of an injury (introduced here). Here is a chart of his injury index and fastball speed over the past three years. 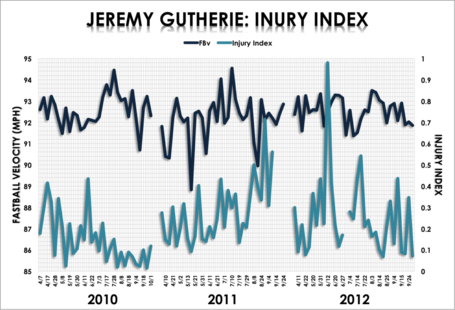 He was relatively healthy in 2010. Over the course of 2011, he got more and more inconsistent. In 2012, he was OK, until he imploded on June 12. The main factor that set off the huge spike in the injury index was a significantly inconsistent release point.

Here is his release points over the first 4 innings of the game. Only one point stands out. 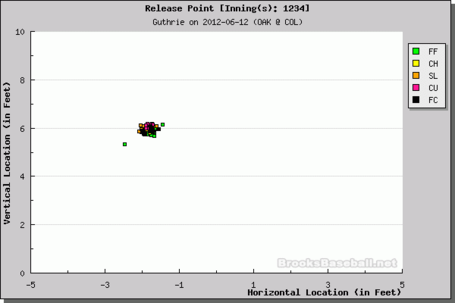 Now, here is his last inning pitched that day. 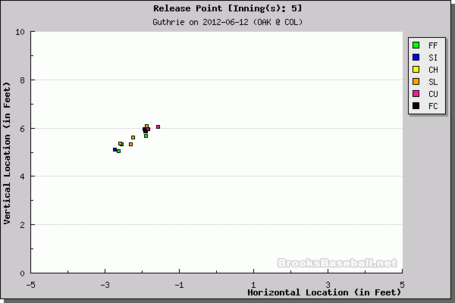 He was all over the place. His release points varied by over a foot in the horizontal and vertical directions. He was then moved to the bullpen and later traded to the Royals. Once with the Royals, his injury index drop, but it was not great. Unlike Santana who saw his fastball speed drop as his injury index increased, Guthrie's average speed stayed relatively constant.