Shields is the "front of the rotation" guy. But who is Wade Davis? And why would the Royals want him?

Wade Davis was selected in the third round of the 2004 draft out of Lake Wales High School in Florida. The conventional thought at the time of the draft was that the right-hander would attend the University of Florida, but the (Devil) Rays were able to sign him for a $475,000 bonus.

The prototypical "power arm" Davis ascended slightly ahead of schedule. Once he got to high-A in 2007, he stepped on the fast track and reached the majors two years later. The 2007 season, was a standout one for Davis in many ways. As mentioned, he opened the year in High-A, but moved to Double-A in mid-season. Overall, he threw 158 innings and struck out 169 batters against just 51 walks. It was following that year Baseball Prospectus had this to say:

Davis is one of the true studs in the Rays' system, and some in the organization think he's their best, better even than last year's number-one overall draft pick David Price. Davis is a pure power pitcher with a big frame, a big fastball in the mid-90s, and a hammer curve that grades out even better than the heater. His command is average, and his changeup is spotty, but he's young, has room for improvement, and projects as a well-above average starter with All-Star possibilities.

The 2008 season posed his first test as a pro. He struggled out of the gate in Double-A. His command was off and he wasn't missing as many bats as he had earlier in his career. Still, he was able to get on track by the summer months and earned a second consecutive in season promotion to Triple-A. He opened the 2009 season back in Durham and after a cumulative spell of 211 innings where he struck out 195 batters, he made his major league debut when Scott Kazmir was dealt to Los Angeles, which opened a spot in the rotation. In his first exposure to major league batters, Davis made six starts with a 8.9 SO/9 and a 3.2 BB/9. He finished with a 3.49 xFIP and totaled 1.1 in fWAR.

It was a performance that validated his existence on top prospect lists. Prior to the 2010 season, Baseball America regarded Davis thusly:

Barring something unexpected, Davis should be a fixture in the Tampa Bay rotation for the foreseeable future. He has the upside of a No. 2 starter, and the Rays also could be tempted to make him a closer down the road as they try to figure out how to get all of their talented young pitchers on the big league staff.

There's nothing there that screams, "Number 34 prospect in all the land." He lost velocity in his fastball and the bite of his curve. He stopped missing bats, particularly in the first half of 2011 season where he became some sort of insane "pitch to contact" pitcher. There was a lot of weirdness going on with Davis in 2011. His delivery, which was so smooth in the minors and early in his major league career, suddenly became "mechanical." Maybe it had something to do with his horizontal release point. 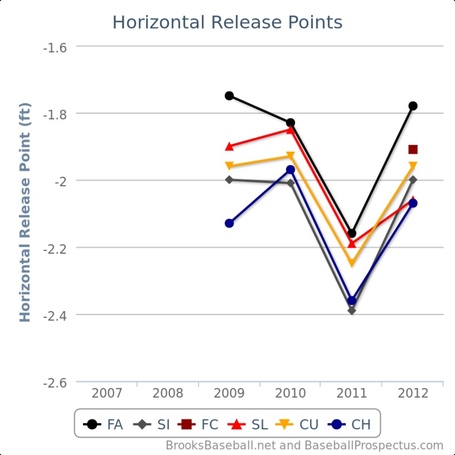 He was dropping down more and was really (I mean really) falling off to the first base side of the pitching rubber. There was nothing smooth about this delivery. His velocity and command suffered. I have no idea why he felt the need to adapt this delivery, but by the end of the season he was back to his "normal."

Still, the Rays moved him to the bullpen for the 2011 playoffs and that's where he pitched for all of 2012. As you would expect, in the short relief role, Davis saw an uptick in velocity. With a 93 mph average fastball, he regained his moniker as a "power" pitcher. Again, from Brooks Baseball: 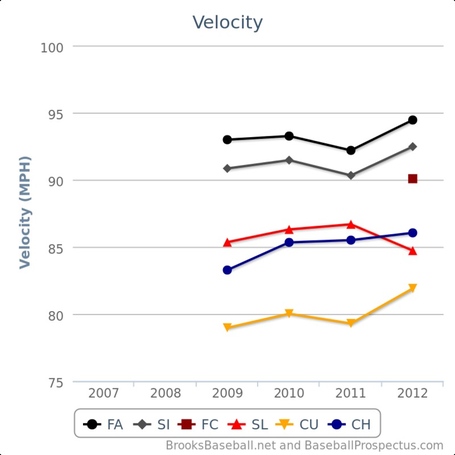 In the bullpen, Davis once again missed bats. His 74.5 percent contact rate was the best of his career. His strikeouts skyrocketed to 11.1 SO/9. His 1.1 fWAR matched his career high he set with those six starts back at the end of the 2009 season.

Davis hasn't come close to meeting expectations he set in the minors, but given his performance coming out of the bullpen, he's a low risk guy with some upside. The best case scenario: He finds his place in the rotation. Probably in the back end, but he can be a guy who can give you some solid innings and a half-decent chance to win every time he starts. Worst case: He flames out as as starter, costs the Royals some wins and heads back to the bullpen to work behind Kelvim Herrera, Aaron Crow and Greg Holland.

Just ahead of the 2011 season, Davis signed a contract extension that bought out his arbitration years and potentially two years of free agency. His deal breaks down like this:

The way I understand the deal, any of the options can be bought out for $2.5 million.

To me, Davis is the key to this deal. With five years remaning at $32.6 million, Davis has a strong chance to repay his deal. He's just going to need to be worth around 1 fWAR for each of his five seasons to match the investment. The catch: In his two full seasons as a starter, he totaled just 1.5 fWAR. I'm assuming the Royals, with an already strong pen, will shift Davis back to the rotation. If he doesn't pan out in the rotation, the Royals are on the hook for $10.1 million and they can let him go when he becomes prohibitively expensive prior to 2015.

In this trade, we can now close the books on Phase One of The Process. With Wil Myers and Jake Odorizzi gone, there are no more impact prospects in the pipeline that we can expect to see in Kansas City in 2013. That window I've written about before? Dayton Moore just threw a big rock through that sucker.