Dayton Moore wheels, deals and settles arbitration cases. How the last couple of weeks have altered the Royals payroll landscape.

Share All sharing options for: Updating The Royals Payroll

When we last checked in with the Royals Payroll Department, they had nine players under contract for 2013. By estimating the value of the remaining 16, I came to a grand total of $67.25 million for the Opening Day payroll for the upcoming season.

Since then, things have changed.

There are now 13 players under contract for the 2013 season. (That doesn't include Aaron Crow. More on him in a moment.) Here are the known contracts: 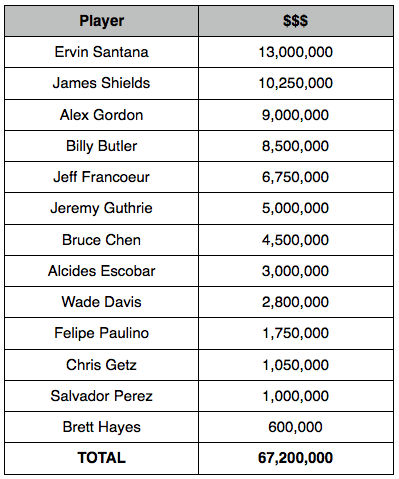 *Edited to reflect the escalators in Shields' contract for 2013.

Don't forget, the Royals are getting a cool million from the Angels in the Ervin Santana deal.

Of course, there is the Luke Hochevar tender to settle. Estimates from MLB Trade Rumors put his pending contract at $4.4 million. That's a healthy raise from the $3.51 million he pocketed last summer. Yes, his performance was dreadful. Yes, it would be nice to be horrible at your job and get a substantial raise. However, things like innings pitched count more than sabermetric stats such as xFIP. It is what it is.

So with the Santana adjustment and the Hochevar estimate, the Royals are now at $70.6 million.

Then, there's the Aaron Crow contract. He is in the final year of a three year, $3 million contract. When he signed the contract, he was given a $1.5 million bonus. Cot's Contracts had his total deal at $1.6 million last year. I'm assuming that means his bonus was spread over three years. With little info here (Cot's doesn't have a number for him for 2013 yet) I'll put him down for another $1.6 million.

With Crow and Hochevar, that gives the Royals 15 players who will be under contract at an estimated total of $72.2 million.

Finally, there are the Minimum Wagers. There will likely be 10 players who have less than three years service time, so they will basically be forced to accept the contract the Royals offer. Minimum salary is $490,000 in 2013. I figured Eric Hosmer would probably be the highest paid of this group at around $510,000. Some will make the minimum, others will make a few thousand more. At this point, I'm comfortable estimating these 10 players will earn, on average, $500,000.

With the additional $5 million due to this group, the Royals Opening Day payroll now stands at $77.2 million.

That would be the largest Opening Day payroll in the history of the franchise.

Remember, Dayton Moore said he was at his fiscal limit in late November. That was before the club added almost $12 million in contracts in the Myers trade. David Glass has gone on the record saying he's merely breaking even year after year. I dispute both claims and figured the Royals have around $90 million to spend before Glass enters the danger zone of losing cash.

So as the Royals are careening toward their own fiscal cliff, where are they going to make cuts? While I don't think this team is poised for competing in the AL Central, there is no denying they should improve their win total from 2013. Obviously, there's some dead weight here. We can scream loud and often, but there's no way the Royals part company with Jeff Francoeur. If the Royals were really in a financial pinch, removing his $6.75 million from the books would certainly bring some relief. Except, who would take that contract? It's like shopping in an antique store... You break it, you buy it. The same can be said for Bruce Chen and his $4.5 million. Yes, the Royals are shopping him. No, people aren't even kicking the tires. And there's the whole Hochevar problem.

If the Royals were to subtract salary, the only way that can happen would be to deal off their more coveted assets. That would mean Billy Butler or Alex Gordon. I know some are increasingly cynical of Dayton Moore, but for him to move a player like one part of his Dynamic Duo would be to alter course yet again. He just traded prospects for major league talent. Would he trade major league talent for prospects? Highly unlikely.

The point is, I think the Royals are done at this point. The roster feels relatively set. There may be a minor move or two between now and March, but this is the crew the Royals will open the 2013 season with.

With a payroll around $75 million. Interesting how that works.