The author looks at the offensive comparison between AL Central teams in 2012.

This is the latest in a series of articles looking at the Royals position by position in an attempt to find places to upgrade a struggling offense. The comparison is made with other teams in the American League central because that is where the Royals need to concern themselves.

Let's start with who played for the Royals at left field in 2012.

*sOPS+ is how the player compared offensively to the rest of the American League third basemen. 100 is about average while 90 is about 90% of average.

Alex Gordon, Alex Gordon and more Alex Gordon. I hadn't realized that in 2012 Gordon had started nearly every single game. It's certainly a testament to his ability, durability, commitment and a weak bench. Though his replacements did and admirable job in the 13 plate appearances they got, anyone would look at the Royals lineup without Gordon and with one of the bench players and struggle not to vomit.

How did Gordon compare to the rest of the American League Central left fielders?

At long last, a position where the Royals have the best offensive output in the division (not to mention defensive value as well). The Twins surprised me by coming up nearly equal in the Royals with Josh Willingham. I will admit right here that

2. I had no idea that Josh Willingham was not only a really good hitter in 2012, but has been so for 7 seasons now.

Willingham was a free agent prior to last season and the Twins gave him 3 years and $21m. Compare that with the Royals giving Francoeur 2 years and $13.5m. He is no real value on defense, but would've brought a valuable bat to the lineup. Oh, i know, free agents refuse to sign with non-contenders. Willingham was clearly blinded by the Twins 2011 record of 63-99 and would never have considered the Royals.

Back to reality and left field. Alex Gordon is good, has been good and will likely continue to be good. He's the most valuable player on the Royals and it still seems he's underrated. I'm not sure there are any steps forward for Gordon, but there don't really need to be any. He might find a few more balls landing beyond the boundaries, but at this point he is what he is.

Fortunately for the Royals, what he is is not only one of the best left fielders in the division, but in all of baseball. Alex Gordon is without question the most important Royal going into 2013. He is one of two players who are holding the baseline for offense. There are lots of folks predicting the Royals to improve their place in the standings in 2013 and it includes many assumptions. The one least talked about is assuming Gordon and Butler continue to provide similar value. Look at the chart below. 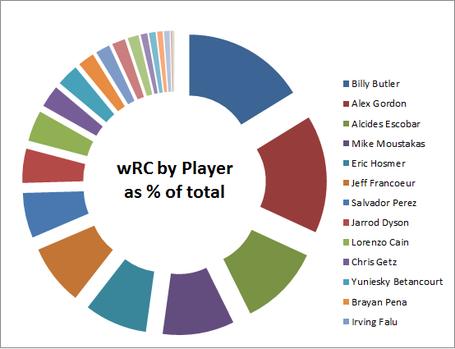 This is wRC from Fangraphs and each slice of pie represents an individual players contribution. Those two big red and blue slices are Gordon and Butler. It's a good bet that Escobar's slice will get smaller and many are assuming Hosmer, Moustakas and Perez all go up (big assumption). But if Gordon and Butler don't maintain then it's treading water.

Gordon has shown he's someone who can be counted on to produce runs offensively. He's dealt well with the Royals jerking him around and with some freak injuries. He's as sure of a bet there is on the Royals, well other than that early-morning-meal nicknamed DH.

Many will say that the path to the playoffs is paved through the Royals starting position, but without the bedrock of Gordon and Butler the path will be a quagmire.