Trying to explain the differences in UZR.

Share All sharing options for: Moustakas, Escobar and Defensive Metrics

Defensive metrics didn't like Alcides Escobar this season. In 2010 he had 3 UZR (defensive metric used at FanGraphs to show how many runs the player saves above or below the league average of 0). It jumped to 10 in 2011. In 2012 it plummeted to -12. Statistically, he went from one the best defenders in the league to one of the worst. Mike Moustakas went the other way. In 2011, he was exactly league average at 0 UZR. In 2012, it jumped to 17. It seems like the Moustakas and Escobar traded bodies. The change in each players UZR may not totally of their fault. The way the stats are calculated could cause some of the shift in values.

For years, my one issue with the current defensive metrics is they attempt to show how a player is doing compared to the league average at a position. This method helps to give run values to the defense for inclusion into complete value metrics like WAR. The problem is the pool of full seasons of playing time at each position is limited to 30. If a couple of excellent defensive players get hurt or a player is moved to another position, a player's value may change quite a bit even though they may be creating the same number of outs (example from a few years ago when I looked at this issue with some shortstops).

The first key to solving this problem is to get a year-to-year baseline of each position. It would show if all the defenders at a position are making more or less outs than the year before. Since I don't have access to any of the good play-by-play data that is used to create UZR, I created a simple metric which looks at the number of outs a position creates (I will call it Out% in this article because I am basically too lazy to type it out every time). Basically, It measures the player's range. It doesn't take into account turning double plays, digs at 1B and OF assists. Here is a graph of the percentage of all batted balls that the position turns into an out: 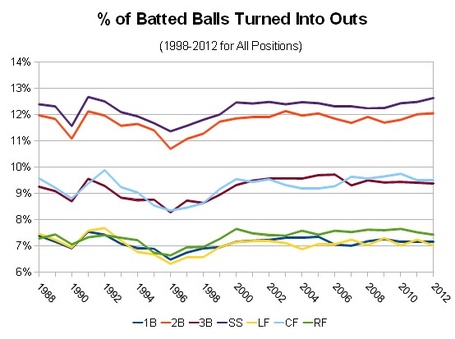 The percentage of outs changes year-to-year, but generally stay within a 1% range. A big drop in fielding happened in the mid-90's. Using metrics set to the league average, a short stop who made an out at the 12% level each season in his career would be above league average in 1996. By 2000, he would be below league average. His skills may seem in decline, instead the other SS in the league were improving.

It may be a little tough to see in the above graph, but the SS Out% went up in 2012 while the 3B Out% dropped.

With the change, SS who fielded the same would look worse while it would be the opposite for 3B. The change is important and accounts for just a little bit of the difference seen with Moustakas and Escobar. Here is a graph of the Out% for Escobar and Moustakas compared to the league average at their position. 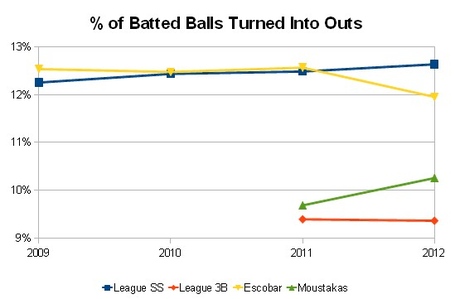 Escobar saw his Out% drop quite a bit and Moustakas saw his increase. The changes in the league values exacerated the problem.

An explanation of the change could be from the Royals shifting Escobar to the middle of the field leaving Moustakas to get to more balls on the left side. By combining both of their Out%, the left side of the infield made almost the exact same number of outs in 2011 and 2012 which was just over league average.

The Royals got the same number of outs, it just came from Moustakas vice Escobar.

Defense metrics that adjust to a league average may show a player's talent changing when it really isn't. Changes in player talent can be known once the league baselines are set. While the change in baselines helped to explain some of the change in Escobar's and Moustaka's UZR from 2011 to 2012, the number of outs created by each player changed the most. If the combination of the pair's values are taken into account, the pair created the same number of outs in 2011 as 2012. I will find it interesting to see what their 2013 numbers will look like.