Share All sharing options for: Royals in 1970-71 Sports Illustrateds

In my many adventures trying to find cheap stuff, I bought this box of SI's for $10. 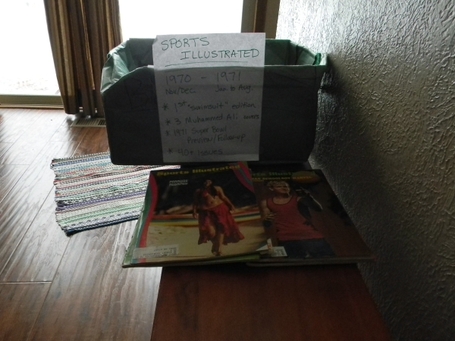 The new girl cheerleaders were cheerless --- "People got mad when we stood up to cheer," said one. "They said they could not see the game"

Royals cheerleaders. Really. I searched for 15 minutes for some images online with no success. Help me here. I have to see these an image of these cheerleaders.

And Outfielder Carl Taylor went on a dreadful tear. Irked when Umpire Jerry Neudecker said he trapped, rather than caught, a Brooks Robinson line drive, Taylor charged the ump. Teammate Cookie Rojas intervened and was punch in the jaw for his trouble. Two nights later, Taylor took himself out of a game with the Orioles, burned his sweat shirt in the club house and disappeared. He turned up in Sarasota, Fla., where he said his mother was sick and he was sorry.

How have I never heard of Carl Taylor. Here are his career highlights, IMO:

Kansas City starter Bruce Dal Canton, who is doing a research project on major arm ailments for a master's degree.....

I don't know who is the bigger nerd ... him for writing it or me for wanting to read it.

Amos Otis at 3B

...he [Otis] would solve the team's [Mets] chronic third-base dilemma. The drums rolled and trumpets blew, but when the season began, Ed Charles was at third and the publicized Otis was on the bench.

Innovation and the Royals

... the Royals turned it [a pitching machine] around and aimed it at their infielders. It throws a ball at exactly the same spot every time, and the fielders move closer or farther away, perfecting their technique with various bounces. And because the bounces are uniform, the players' reactions can be measured and compared. For trickier bounces, the staff used a curve ball pitching machine.

But what about the scouts?