There has been a lot of talk about what the Royals 2012 rotation might look like. A conventional wisdom (which has come at least partially from the Royals front office) has emerged that there are three pitchers who, barring injury, will definitely be in the rotation: Bruce Chen, Luke Hochevar and Jonathan Sanchez. Then, there is a larger group of pitchers who are competing for the last two spots.

Given his 2011 performance, career MLB stats and his scouting reports, I have been both bewildered and frustrated that Felipe Paulino hasn't been considered a lock for the rotation. There's a lot to like there, and it seems to me that his only serious competition is prospects who may or may not be Major League ready. Anyway, I thought it would be useful to see what the projection systems say about the Royals rotation candidates. For 10 pitchers, I compiled the ERA and FIP projections from CAIRO, ZiPS and PECOTA. Then I averaged the ERA and FIP projections and finally did a weighted average of those averages (CAIRO = 1, ZiPS = 2, PECOTA = 2). The results are after the jump. 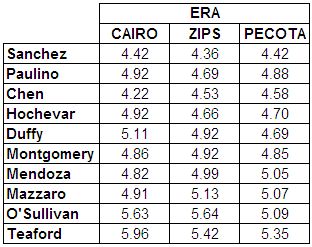 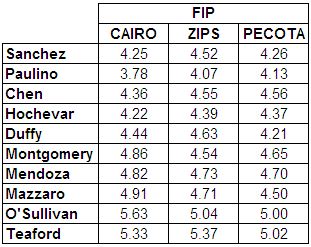 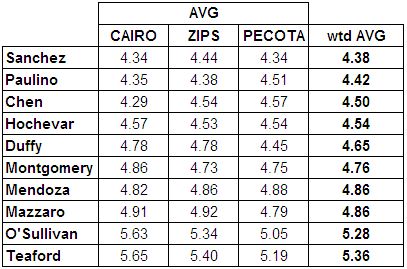 If you give pitchers credit for their defense-independent stats (strikeouts, walks and home runs), and some responsibility for runs allowed, then you should look at the "AVG" table. Based on that, and a weighted average of these projections, it appears that Felipe Paulino looks to be the second based starting pitcher for the Royals in 2012. Is there really a serious chance Moore and Yost could fail to include Paulino in the rotation? I certainly hope not.* It will definitely be #1 on my "worst moves possible" for 2012.

Conspicuously absent from the above lists is Aaron Crow. His projections came primarily from his 2011 stats as a reliever. I didn't want to include them side-by-side with pitchers whose projections are based primarily on their stats as starting pitchers. It would require some kind of manual adjustment to take into account the worse results that you should expect from any pitcher going from the bullpen to the rotation. For what it's worth, his weighted average was 4.37. You've got to add at least half a run to that if he's a starter. That would put him at about the same level as Luis Mendoza and Vin Mazzaro.