Share All sharing options for: Royals Notes for 4/17: K-Gun, Choo and Betancourt.

Trivia Question: On Sunday, MLB baseball celebrated Jackie Robinson Day. Every player in the majors wore a jersey with 42 on the back. The number 42 has been retired since 1997. Who is the last MLB player to still wear 42? Who was the last Royal to wear 42?

The Royals and opposing pitchers seem to be throwing a little harder on this first home stand. The radar gun at The K seems to be reading a little high. The Royals had this same problem in 2010. Here is a look at the pitchers that have started a game in KC and how their fastball speed compares in other stadiums.

It looks like the radar gun at the K is about 2 MPH too fast. It will be interesting to see if they change it.

The main reason why Choo was a little mad at Sanchez on Saturday was because it was the second time, in less than a year, that Sanchez hit him. Choo missed 41 games because of a thumb injury last season. First off, both of these players have a tendency to hit or be hit. Of the 197 players with 1500 PAs since 2008, Choo ranks T10th with 39 plunks. Sanchez is T22nd out of 91 pitchers with 500 IP since 2008. It should not be any kind of surprise that someone got hit.

I have seen Sanchez pitch, He is all over the place. He is the Latin Eddie Calvin "Nuke" LaLoosh. I am a little surprised he doesn't hit more batters. Choo on the other hand crowds the plate. First, here is were Choo has gotten HBP over the last 2+ seasons compared to the league average. 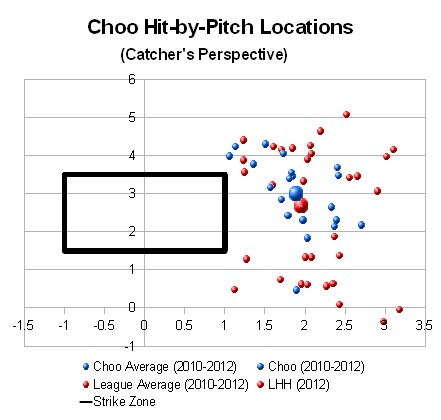 He gets hit closer to home plate and also in the upper body quite a bit. This is because his batting stance puts him over the plate as seen here: 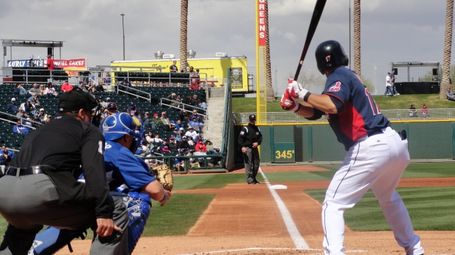 Yuni has been sitting the last couple of games with a sore ankle that he got during Spring Training. He declared he was able to go for the season. Yea right. This is from the same medical staff, trainers and coaches that didn't notice Jason Kendall couldn't throw back to the pitcher without the help of his other arm.

So in the first 8 games, Yuni has started 5 times (2B four time, 3B once). It may may be safe to assume that the injury wasn't that bad. Wrong assumption. On the 14th vs. Cleveland, he hit into a double play in the bottom of the 2nd. He seemed to be moving really slow. With the help of MLB.tv, I went back and timed him from home to 1B. 4.84 seconds. Since it was a double play, a person would assume that he was giving it his all to limit the play to just 1 out.

Now, who to compare him to? Ahh, Billy Butler also ground out that very inning. How long did it take Billy to get to 1B. 4.50 seconds. WTFlyingF. If your starting 2B is being out run by one of the slowest players in the league, it may be time to sit him.

This is wrong on so many levels. Did the Royals not notice him limping around? If so, did they not care? Is it more important to fill his ego full of sunshine? Do they think less of Getz than I do? Was Yuni just not giving it his all on a double play. I just don't get. Just remember, It's Our Time .. to do the same stupid stuff we did in previous years. #$%^&*

Answer to Trivia Question: Mariano Rivera is the only player to still wear number 42 on his jersey. The last Royal to wear 42 was Tom Goodwin in 1997. 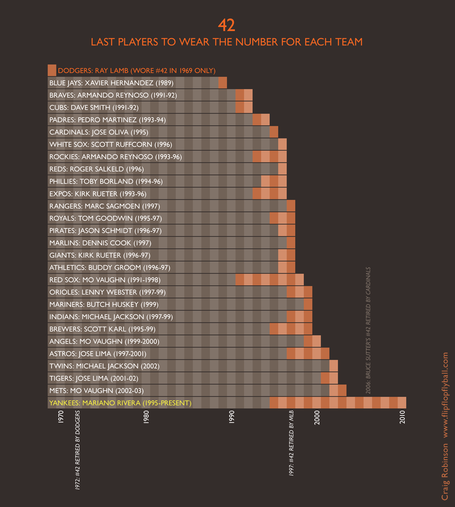