Royals Lose 3-9, Tigers Get to Hochevar In 1st Inning; Why Does Hoch Struggle With Men On Base?

Share All sharing options for: Royals Lose 3-9, Tigers Get to Hochevar In 1st Inning; Why Does Hoch Struggle With Men On Base?

The Royals were in the game in the top of the first innings when the score was still 0-0. Then the the bottom of the 1st happened. 6 Hits and 2 errors later, the Royals were down 5-0. Even though the Royals were able to score single runs in the 5th, 6th and 8th innings, the game was basically over. This game is similar to many games in the past, especially when Hochevar pitchers, where one big inning has led to the loss.

Hochevar's results are horrible once runners are on base. Usually he runs into problems in the 5th or 6th inning, but tonight it started when the first batter got a hit. With no runners on base, Hochevar allows a triple slash line of 0.247/0.307/.409. Once someone gets on base, the numbers jump to 0.302/0.371/0.474. This type of difference causes his (Earned) Runs Allowed to be higher than is ERA predictors. Here are his ERA and ERA predictors from 2008 to 2012:

Luke's ERA exceeds his predictors by almost 1 run in each case.

The problem is not just limited to Luke. Of the top 10 pitchers whose ERA has exceeded their FIPS from 2008 to 2012, 5 are/were Royals:

Besides just individual players, (ERA-FIP) can be examined at the team level. Over the same time frame, the Royals led the league with a value of 0.36. The 4th ranked team, the Pirates, have a value (0.17) that is half of the Royals value.

Looking at the team list, there seems to some pattern to the top and bottom teams. The Rays, who recently are a great defensive team, have the lowest ERA (3.98) compared to the their FIP (4.19). The better the defensive team, the better the difference between the values. Here is a plot of the team's total UZR and (ERA-FIP) from 2008 to current. 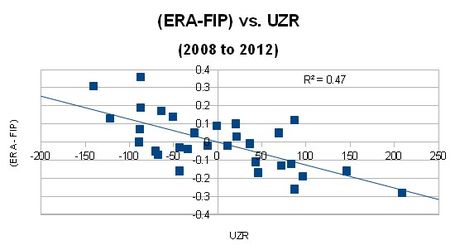 There is definitely some correlation in the data. The Royals UZR of -88 should be closer to an (ERA-FIP) value of 0.10, not 0.36. A crap-tastic defense can some what be blamed for the difference, but it is not the only reason.

Is a certain type of pitcher? Why are the Royals the only team that seems to target these players? Why do other teams know better not to go after them?

Is it coming from the management? Is it the team's fault for not teaching the players to pitch with men on base? Is there anything they can do?

The team is not just being unlucky with runners on base. There are too many coincidences for too many years for it to be dismissed at luck. The problem is fairly complex and so may be the solution. Until the Royals been to get to the bottom of why their pitches can't pitch with runners on base, they are going to continue to see their starters struggling with long innings with many base runners and many runs scored. At least they let the cat out of the bag early tonight by allowing the big inning early.