There are very few jobs that invite as much criticism as that of professional sports coaches and managers. Every transaction, every decision, regardless of how trivial or inconsequential, ends up being run through the ringer of public opinion, either to be lauded for its wisdom, or as more likely will be the case, to be questioned or denounced. I can imagine that most of us, if subjected to the same level of scrutiny in our own chosen careers, might find it more than a little difficult to perform at an optimal level. Fortunately, every time we underwhelm with a business decision, we don't have a multitude of blogs and talking heads pointing out what went wrong, or individuals calling for our dismissal on facebook or twitter. Not so with sports professionals.

So, in a way, it's hard not to feel at least a smidgen of sympathy for Dayton Moore. On the other hand, he's getting paid a lot. And despite all of his efforts, he's still never been able to assemble a team capable of being even mildly competitive. (The jury is still out for 2012, obviously, but early signs don't look promising.)

The other thing is - and this is point of this article - Moore seems to make the same type of mistakes over and over again. Some of these gaffes have been explored at length on this blog and elsewhere - Moore's predilection toward acquiring ex-Braves and ex-Mariners, his love affair with Yuni Betancourt - but there are other tendencies that have been, to my knowledge, unexplored. And in many ways, they're much more damning. Here's a taste before the jump: 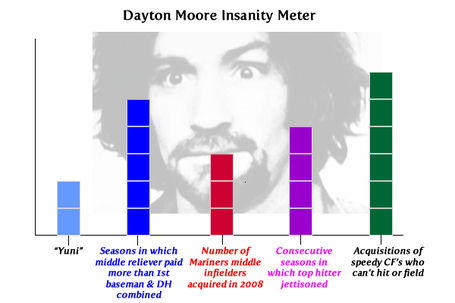 Dayton infamously said once that "pitching is the currency of baseball." Sure enough, Moore has spent a considerable amount of effort stocking our minor leagues with pitching prospects, either via trade or through the draft. Not a bad strategy, necessarily. The problem has been that Moore has been loathe to trade any of that pitching surplus to improve the team in any considerable way (and the times he has traded away pitching, he hasn't exactly gotten a fair return on his investment - Greinke, Nunez, Ramirez, Howell, Affeldt, etc.)

Worse yet, I don't think anyone's bothered to tell him the real currency of baseball is, in fact, money. While having a bunch of pitchers in AAA is nice - having actual cash on hand to pay for free agents will help your team considerably more in the long run, provided you spend it wisely. But that isn't what Moore has done.

Here's a breakdown of how much Moore has spent on free agent acquisitions during his tenure as general manager. You'll need to click to enlarge it, but here's the short of it. Moore has spent almost $50 million (either in signing or by exercising an option) on free agent relievers over the last 6 years, and if you exclude the enormous albatrosses that were the Guillen and Meche contracts, only around $44 million on starting pitching and position players over the same time span. Considering the amount of effort put into stockpiling pitching at the minor league level, to spend this much on relief seems rather short-sighted, since there should in theory be a readily available amount of arms that can be called up at a fraction of the price.

It was especially egregious when you had a player like Ross Gload or Mike Jacobs manning 1st base at around $1 million per year, and Moore was spending as much as 4x more times as much on guys like Ron Mahay or Brett Tomko. The chart above would suggest that over the last few years they've finally got their act together and decided on a budget for relief (15% of overall payroll), but it still doesn't excuse how in 2010 Farnsworth was getting paid more than any position player on the team not called Jose Guillen, or how this year Broxton managed to land a $4 million contract, despite his coming off of a major injury, with better, cheaper options already available on the 40 man roster.

As long-time Royals fans know (and is there any other type of Royals fan? I can't imagine the team's been attracting too many new fans in the last 10 years), scoring runs has been hard to come by for the squad. In fact, the team hasn't managed to score over 760 runs since 2003, when they cleared 836 behind strong performances from Beltran, Sweeney and Raul Ibanez.

Not surprisingly, this was the last time the team played over .500 ball. You would think that Dayton Moore would have tried to address this run-shortage, but in fact it would appear he's done exactly the opposite.

This will sound sort of like a conspiracy theory, and certainly you can make excuses for a lot of these moves, but taken as a whole, it would appear as though Moore was intentionally trying to damage the offense. That's a bold accusation, but let's just examine the evidence.

Every year since Moore's been in charge, one or two of the top offensive players has been marginalized or removed entirely the following season. It seems as though showing any sort of competence with the bat has signals the end of one's career with the Royals. I've only listed the team leaders in OPS each season, but even the lesser players seem to get jettisoned as soon as they demonstrate improvements in offense. Matt Treanor posts a surprising .350 OBP in 2011? Gone. Josh Fields hits .306/.320/.490 over 50 at bats? Let him walk. Getz posts a .237/.302/.277 line in 2010? Let him be our primary 2B the following season.

The one guy on that list that seems to have emerged unscathed is Billy Butler. But let's not forget that Moore actually tried to trade him for Yuniesky Betancourt.

I understand the Braves were winning championships with offensive zeros like Mark Lemke, Quilvio Veras, and Walt Weiss manning the infield, so perhaps Moore thinks that might be a key to success - (as opposed to the 3 HOF pitchers Atlanta boasted in the starting rotation.) Perhaps we can forgive him for trying to continually acquire another Otis Nixon seemingly every season. Maybe the Rico Brogna/Wes Helms first base rotation in 2001 gave Moore the idea that Ross Gload was not only a guy to acquire, but a guy whose contract should be extended, despite better, cheaper options in Kila or Shealy or even god-forbid Craig Brazell.

The point is, there's nothing that indicates that Moore is trying to improve the offense. You don't re-sign Yuniesky Betancourt or trade for the like of Humberto Quintero, or Tony Pena, Jr., or Alcides Escobar, or any number of the players that Moore has acquired over the years.

We can hope it's because he's just being incompetent, or stubborn, or trying to emulate some picture he has in mind of what he thinks a successful baseball team should resemble. The thought that he is intentionally trying to neuter the offense is just too abhorrent.