Trivia Question: After putting out an easy question on Tuesday, this one is quite tougher. Greinke has hit the only Royals pitcher to hit a HR since inter league play as started. The Royals played a 4 seasons before the DH was instituted. Who are the Royal pitchers to hit HRs in the franchise's first 4 seasons ('69 to '72).

Getz took on a new batting stance late last year. Many people, including myself figured it wouldn't really help. Well, it is time to eat a little crow. Chris' ISO (0.163) is twice as much as any other time in his career. It is 5 times higher than the 0.032 he posted last season. His line drive percentage is at 38%. His career average is 20%. His BABIP is at 0.375, another career high. My amateur scouting eyes agree with these stats, he has been hitting the ball better.

To illustrate the point further, his average fly ball batted ball distance from 2009 to 2011 was 247 ft. So far in 2012, his flyballs have averaged traveling 281 ft. It may be too early, be I am drinking the Chris Getz Kool-Aid.

And Hosmer and Francoeur have not missed a game yet. OK Ned.

Yesterday, Sanchez was limited to 5 innings. It was not known until later the game that he was battling a cold/strep. One way to see if a pitcher is pitching correctly is to compare the pitcher's pitch speeds from a previous game. Here an image from his first start of 2012 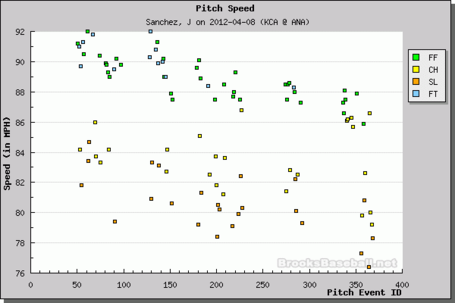 See how there is a nice difference between his fastball and his change up. Now here is the same chart from yesterday: 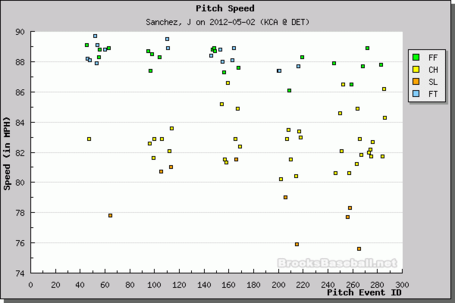 As it can be seen starting in the 3rd inning and continuing into the 5th, he doesn't have the distinct differences. This lack of difference is usually a sign that pitcher's body is telling him to not throw as hard.