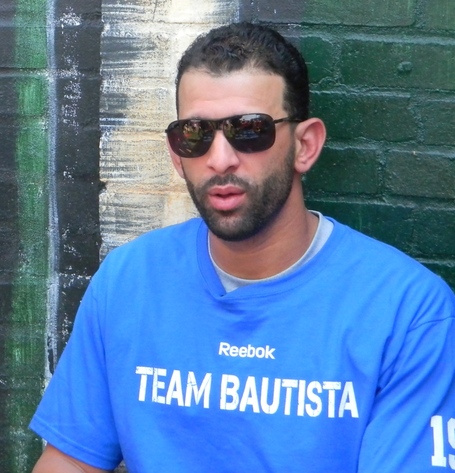 For almost 30 days in 2004, the Royals had Jose Bautista on the team. The Royals acquired him from the Tampa Bay Rays for cash considerations. During that month of service, he played in 13 games and came to bat 26 times. He put up a triple slash line of .200/.231/.240 with a double being his only extra base hit. After a month, he was traded to the Pirates in a 3 way trade with the Mets with the Royals getting Justin Huber.

Times sure have changed and Bautista is now the best home run hitter in the league. On Tuesday morning after finishing 2nd in the Home Derby, I was able to ask him a few questions on his short time in Kansas City at the Reebok Cross Fit Challenge.

What do you remember about your time in Kansas City?

I learn a lot from the team. Tony Pena was a great manager and he taught me bunch. The Royals felt they needed a catcher, so I was moved.

What was your fondest memory of playing in Kansas City?

The players. I became good friends with Mike Sweeney.

How crazy was that summer when you played for 4 different teams?

It sure beats being in the minors. The MLB paychecks are much better than those for the minors leagues.

How do you like being back in Kansas City?

I make it back every season, so I can see the changes, especially to the stadium over the last few seasons. The team is really improving. There is quite a bit of buzz about them. The offense is really talented. The pitching is a bit behind.

You seemed to hit decent against that pitching last week?

I will take what I can get.

How much sleep did you get last night after the Home Run Derby?

A couple of hours. I will be ready to go today.

A big thanks to Jose Bautista and Reebok Cross Fit for giving me this opportunity.