On Saturday in the 8th inning, Salvador Perez got his first walk of the season verses the White Sox. It took 55 plate appearances to get the walk. The sad part is that it was an intentional walk and should not be considered a "real" walk. Last night in the 9th inning, he finally worked a pitcher for his first legitimate walk of the season. Even though he is doing a great job of hitting the ball (0.371 AVG), I am going to look to see what kind of plate discipline can be expected from him.

To start the comparison, I will look at Royals with similar rates over the the past 2 season. First, here are hitters with similar walk and/or strikeout rates:

Perez is fitting in nicely to some of the other impatient hitters on the team. He is not at Frenchy level of hackitude yet (5%, 18%), but he has little patience.

Just looking at Swing % and Contact %, Perez's numbers are close to Aviles and Betancourt. Sorry for the bad news, but it is looking like we have another hacker on our hands.

Now it is time to get a little trippy and look at some heat maps. Here are his swinging heat maps comparing where he swings at pitches to the league average hitter.

The heat map is from the umpire and catcher's perspective. The scale is in decimal percent (0.10 = 10%). 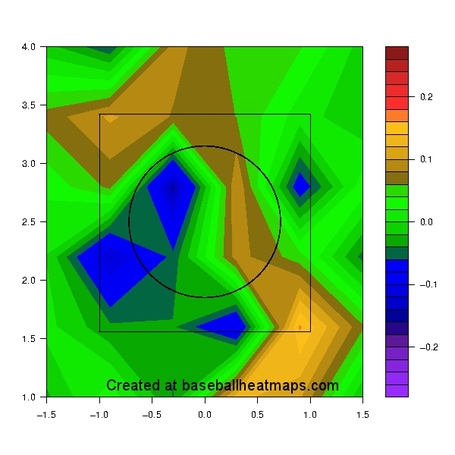 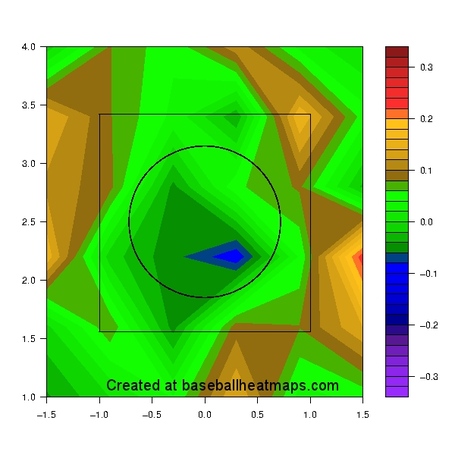 Once you come off your high, here is what I see. First, he doesn't swing at pitches down the middle of the plate even close to the league average against both LHP and RHP. He expands the zone versus RHP, especially on the outside par of the plate. Against LHP, he likes to swing at pitches high and low and not at all inside.

Perez has not shown plate discipline comparable to the average major league hitters. His plate discipline is similar to the likes of Mike Aviles and Yuniesky Betancourt. He has made up for the lack of discipline by making good solid contact when he does swing. It will be interesting to see how pitchers adjust and begin pitching him more and more out of the strike zone.