Royals Turn Back The Clock To 2009 In Another Loss

Share All sharing options for: Royals Turn Back The Clock To 2009 In Another Loss

It was perhaps the most Royal game in this, the most Royal season. Luke Hochevar did an outstanding impersonation of Luke Hochevar. Jeff Francoeur whiffed three times. the Royals defense giftwrapped some runs for the opposition. And Billy Butler had a pretty good game.

A closer look at The Frenchman's plate appearances following the jump.

Jered Weaver show us how they will attack Francoeur... Pound him low and away. Francoeur fouls off the first pitch and takes the second for a strike. A bit of a wide strike zone, but that will happen when you have a hitter who lacks any discipline. Is it right? No, but it's a fact.

Weaver shows him way up and in and then goes back outside for the third strike swinging. 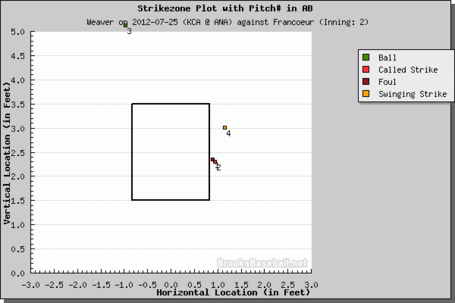 All graphs are courtesy of Brooks Baseball.

In Francoeur's next plate appearance, Weaver starts inside and gets a swing and miss. Perhaps the most surprising thing about this chart, is Francoeur held off on the outside pitch in roughly the same location he offered at to strikeout in the second. Pitch five was a slider in the dirt (not plotted) but pitch six was a slider in a great location. No chance. 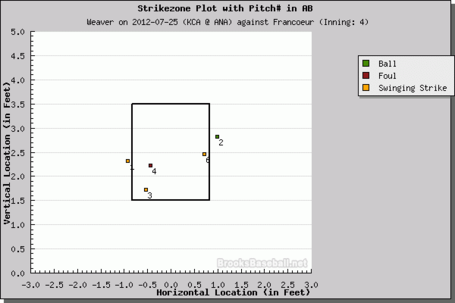 The right-hander Jason Isringhausen is going to work Francoeur away. The first pitch is a called strike that was a generous call. Pitches two and three were way out of the zone, but he can only foul off a 90 mph sinker to even the count at 2-2. Francoeur expands the strike zone and fouls off pitch five. The final pitch is another fastball on the outer half for a foul tip strike three. The Golden Silver Plated Sombrero. 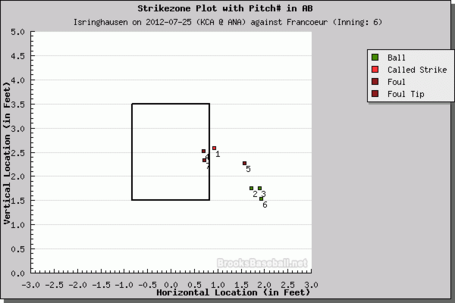 In Francoeur's final plate appearance, he sees the best pitch of his afternoon. A fat 88 mph sinker from lefty Scott Downs. The third pitch was exactly the same as the first two... The only difference was it was poorly located.

The home run broke an 0-15 stretch. We were almost saved.