Share All sharing options for: A Different Way To Watch A Game - Fox Sports Game Connect

A couple of weeks ago, I was invited to attend a Royals game on the dime of Fox Sports Kansas City. Of course I accepted.

On the agenda for the evening’s game was to test drive the latest iteration of Fox Sports Game Connect. Game Connect is an amalgamation of a live box score, some other relevant info and Tweets about the game from random people watching.

Fox Sports has put some effort into the design and development of the platform and it looks really nice. It’s easy to navigate and easy on the eyes. Full review following the jump. 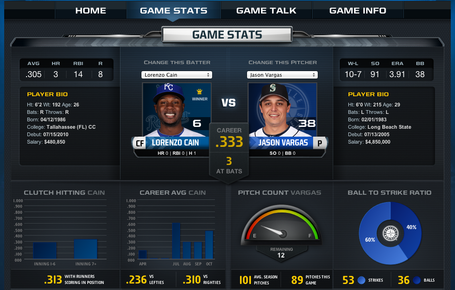 They offer some nice, basic data. Pitcher/batter match-ups, the usual batting average, HR and RBI... The salary info is cool - although I don’t know where the numbers are coming from to populate that category. Maybe Cot’s? Maybe USA Today? The college data should be replaced by draft year and round. Or how the particular player was acquired. The ball to strike ratio is a nifty little visual and the pitch count/gas tank is kind of cute. They take the pitcher’s average number of pitches thrown per appearance and move the needle accordingly. The stats could be a little more relevant perhaps - having a bar graph for batting average that tops out at 1.000 seems a little excessive, especially when the team is still carrying Yuniesky Betancourt - but it’s a start. 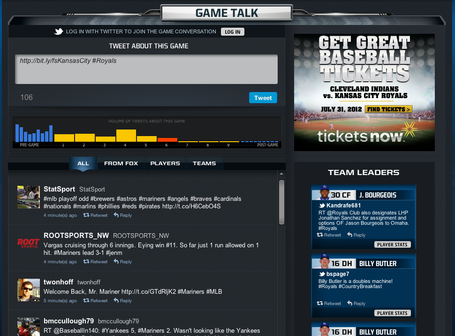 They know they can't compete with MLB's Gamecast, so they're taking a social media approach. You can link your Twitter account to the Game Connect, so you can send a Tweet directly from the app. You can also track related game Tweets. The integrated tweets are helpful in that you don’t have to bop in and out of different apps. You can also monitor Tweet activity by inning. Interesting, I suppose. Or you can click on the "player" tab and see only Tweets about players currently in the game. If you want to follow hashtagged tweets while monitoring the progress of the game, this is a solid app.

There’s plenty of room for improvement, though. The live box score doesn’t give you standard box score info like extra base hits, steals, errors or anything else you find underneath the lineup. A team leader section is a good idea, but listing Jason Bourgeois and his 36 plate appearances as the team’s leader in batting average doesn’t work for me. (At least they didn’t list the Royals true BA leader - Vin Mazzaro who has two hits in four at bats this year.)

Game Connect is fighting for eyeballs, likes, tweets and anything else it can grab. The software if promising, but they face an uphill battle if they’re going to make inroads. We’re creatures of habit. I’ll follow the game through The Review’s game threads. Before that, I was hanging out on Twitter. With the game on the tube. I tried doing both, but seriously… When do you watch the game? If Game Connect has one thing going for it, it’s that the site is a one-stop hangout during the game, keeping your attention on one page. Slowly, Fox Sports is rolling out their product. That makes sense because you only have one chance before viewers will shift to their normal, comfortable habits.