Is Kansas City ready for the post MITCH era?

Maier was a fourth outfielder. And in many ways, he was the prototype. He had limitations as a player, yet it never felt like his presence in the lineup hurt the team. He was versatile and could play every outfield position. It seemed as though he could play all three at an equal level of competence. He understood his role and never complained or trashed another player or manager, even as his playing time dwindled. It had to have been difficult to accept, but you just get the feeling that MITCH was about doing what was best for the team. If you went to a game and Maier's name was in the starting lineup, you would probably ask, "Why isn't (Insert name of regular player here) playing tonight?" And when told The Regular was getting the night off to rest or because of a nagging injury that flared up, you'd just nod your head and scan the rest of the lineup. Because when MITCH was replacing a regular, it wasn't a huge deal.

Isn't that really the nicest thing you can say about a backup ballplayer?

Looking at the roster, I wish MITCH had gotten more playing time this year. Look at Jeff Francoeur. The dude is killing this team with regularity. Hitting .253/.292/.382. A negative fWAR of -0.9. If only the Royals had someone who could spell The Frenchman, because this year he's been a terrible baseball player. Give him a few games to get his head right. Hell, he should really be out of the lineup altogether at this point. He's been that bad.

The Leader stays while MITCH goes. Maier never had a chance. Not when Francoeur was signed to a misguided two year deal. And not when Wil Myers started lighting up the Texas and Pacific Coast Leagues.

Farewell, MITCH. I hope you catch on with a contending team and get to fill a bench role on a team that makes the postseason. If that happens, I'll root for that team in October. (As long as it's not the Yankees.)

After the jump, a look at six of the most memorable games of the MITCH era...

9/23/06 - Mitch makes his debut as a defensive replacement for left fielder David DeJesus in the fifth inning. A native of Novi, Michigan he makes his debut against his hometown Detroit Tigers. DeJesus was pulled by manager Bill Doran (!) after five innings in a game where Mark Redman (!) couldn't get out of the first inning as he staked Detroit to a 10-0 lead. Mitch went 0-2.

8/20/08 - Mitch squares around to bunt in the fifth inning of a game against Cleveland and is drilled in the face by a Zach Jackson fastball. Maier suffers multiple facial fractures and his nose was still bleeding 24 hours after the beaning. He misses just 20 games. Tough.

5/14/10 - Mitch helps the Royals win in Yosty's managerial debut with a two-run single against Mark Buehrle and the White Sox. You would think that would guarantee some loyalty...

5/28/10 - Perhaps Mitch's best all-around game for the Royals. He collected three hits - career high accomplished 10 times - with a walk, a home run and three RBI against the Boston Red Sox.

6/15/10 - Maier sets a career best by reaching base in all five plate appearances in a 15-7 rout of the Astros. Just an epic battle where Kyle Davies crashes out in the fourth inning, but the Royals rally... Scoring 10 times off Houston starter Felipe Paulino.

7/26/11 - MITCH makes his Royal debut on the mound throwing 1 inning against the Red Sox in a 13-9 loss. According to Brooks Baseball, he threw nine change-ups, one slider, four curves and two knuckleballs. Awesome. I love his velocity chart with a max speed of 80.9 mph... 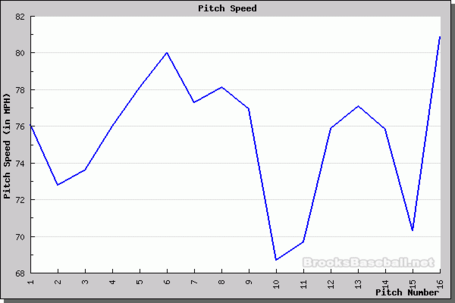 Farewell, MITCH... Good luck. I hope you find a team that properly values your versatility as a fourth outfielder/emergency catcher/short reliever. Don't be a stranger.