How Much Longer Will We Be Subjected To This?

Share All sharing options for: How Much Longer Will We Be Subjected To This?

The Tigers managing to score just four runs against the Royals in a Jonathan Sanchez start is newsworthy.

As Retro put it in last night's game recap, it was a crummy line.

Yet the Royals - as they tend to do - cite it as evidence that he's improving.

"(He was) a lot better," manager Ned Yost affirmed. "His strike-to-ball ratio was much better. His command was much better. He made two mistakes, really, that hurt him. … Besides that, he kept us in the game. It’s something to build off of, I hope."

Entering Friday, Sanchez had thrown 955 pitches, with 533 of them strikes. He's throwing a strike in just 56 percent of his pitches. League average is 63 percent.

Against the Tigers, Sanchez threw 101 pitches with 60 strikes. Yes, he threw more strikes, but he set the bar so damn low. He's still well below league average.

Sanchez Random Suckitude Stat #1: The only pitcher throwing a lower percentage of strikes this year is Kyle Drabek who was at 55 percent before visiting Dr. Jobe.

Looking closer at Sanchez's strikes, only four of them were swung at and missed. Although, to be fair, both of his strikeouts were swings and misses. Still, Sanchez isn't good enough to be pitching to contact. Really, no pitcher is over the long haul, but that's another post.

According to PITCH f/x, Sanchez's fastball (four and two seamers... I'm combining them for simplicity) average 89 mph. That's down from the 91.6 mph he was averaging just three seasons ago. Friday in Detroit, his average fastball was clocked at around 88.6 mph.

And on Friday, his velocity dipped fairly early. From Brooks Baseball, here is his chart: 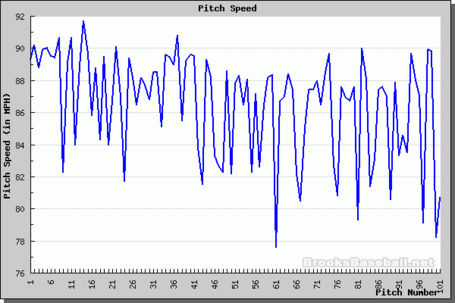 He was at 90 mph or above on just eight pitches. Six of them came in his first 20 pitches. He was able to rally and come close to the magical 90 mph mark later in the start, but this looks like a guy who entered the game with the needle close to empty. By the fourth, he was on fumes.

The other thing I take away from this velocity chart is there is extremely little separation between his fastball and his secondary pitches - namely his slider and change. Again, the gap really narrows in the fourth, the inning where he walked two and went to 3-1 on another hitter. Is the lack of separation a reason for his control problems? Dunno. Although I would hazard a guess that if all pitches are coming in between 88 and 82 mph, hitters no longer gauge speed so they can sit on location.

Sanchez Random Suckitude Stat #2: Sanchez has faced 16 batters with the bases loaded this season. In 52 innings of work. Only Tim Lincecum and Carlos Zambrano have stared down more grand slam opportunities. They each have 17. Except they've thrown 93.1 and 95.2 innings, respectively.

He home run Sanchez surrendered to Young was a fastball up. Missed location. In his postgame, Yosty said that Sanchez was keeping the ball down for the most part. From Texas Leaguers, here's his pitch plot from Friday:

It looks like his four-seamer is a "get me over" type of fastball as he has difficulty locating the two-seamer. He kept the slider down, so I guess that's something.

It's interesting to me how his pitches all have a definite plane running upper right to lower left. Any pitching gurus out there with an idea of what that's about?

Sanchez did nothing to prove he made a start he can "build on." It was the same crap, different day. The only difference is, he spread the base runners through his 5.2 innings.

This wasn't a good start by Sanchez. This was a lucky start. Even Kyle Davies had those.