Here is the box score from the Royals game against the New York Yankees on June 14th, 1971. 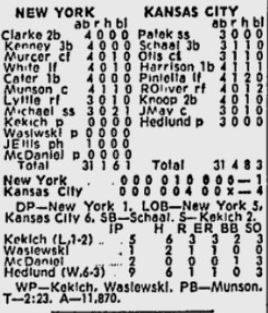 It's 1971 and the Kansas City Royals are in their third year of existence. In 1969, the Royals had won 69 games and then only 65 in 1970. The town, I'm sure was still excited about this new ball squad, but losing always sucks. Early in the 1970 season, the Royals had hired soon to be Hall-Of-Fame pitcher Bob Lemon as their manager.

more after the jump.

This particular game is important because this marked the Royals 6th win in a row and put them a mere 4.5 games behind the first place Oakland Athletics. That same team which abandoned Kansas City just three years prior.

up the paper on this date, seeing the standings and the box score and have that first glimmer of hope. The Royals were on a 6 game winning streak and everything was looking great. Manager Bob Lemon summed it all up when he said after the game "I won't know how to conduct myself when we lose, but I've had enough experience in the past and it'll come back to me."

The Royals did lose the next two games in a row and they never got any closer than those 4.5 games to the Athletics. But they did end the season with a winning record in their third season, the fastest any expansion franchise had ever done it.

This game was just one small moment in time which collectively began the winning era for the Kansas City Royals. There would be plenty of roster turnover between 1971 and 1976 when the Royals lost in the ALCS, but some of the player stuck around. Guys like Patek, Otis, Splittorf and Fitzmorris.

The game itself wasn't especially notable. Starting pitcher Mike Hedlund had a great complete game and a career year. He didn't follow it up in 1972 and was traded for Kurt Bevacqua. Lou Piniella had a pair of hits and no Royal had an extra-base hit in the game.

The Royals proved that they could overcome the difficulties of being an expansion team in the Midwest. They proved that there wasn't anything inherently inferior about Kansas City. You can take your Athletics to Oakland, we're coming after you.

On the morning of June 15th, 1971 as thousands of Kansas Citians were reading about the President concealing troop buildups in Vietnam they could shake of their worries with a little baseball. Nobody knew what was around the corner, either in Vietnam or at Royals Stadium but it was undoubtedly the beginning of something big.